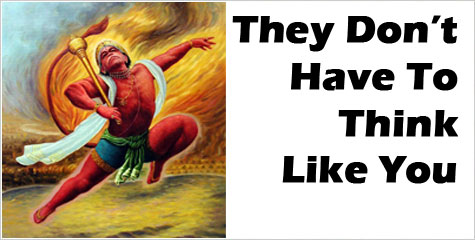 In the Ramayana, Hanuman, the monkey-god, is known as the greatest devotee of Ram. It was he who had located Ram’s wife, Sita, in Lanka, after she had been abducted by the Rakshasa-king, Ravan.

The story goes that, after the discovery of Sita’s whereabouts, Hanuman had, of his own volition, set aflame the city of Lanka. This had displeased Ram as he had no desire to hurt the residents of Lanka for the crime of their king. Not want to displease Ram ever again, Hanuman swore never to take any decision without consulting with Ram.

This absolute obedience became so intense that it alarmed Jambuvan, the wise bear, who also served in the army of animals raised by Ram to defeat Ravan and liberate Sita. When Hanuman was being given instructions of where he would find the Sanjivani herb that could save Ram’s brother, Laxman, from certain death after being injured in battle, Jambuvan told Ram, “Make sure to clearly tell him to come back with the herb after he finds it. Otherwise, he will find the herb and simply wait by the mountain, in complete compliance.” This was not good, Ram realized. The situation had to be rectified.

And so it came to pass, as retold in the Adbhut Ramayana, during the course of the war, Ravan’s cousin, Mahiravan, a sorcerer, managed to abduct both Ram and Laxman, and take them to Patala, his subterranean kingdom. Only Hanuman had the intellectual and physical prowess to rescue them. He had to rely on his own wits; there was no Ram around to instruct him. He was on his own. Jambuvan realized this situation was of Ram’s own making; Hanuman was being forced to rise up to the challenge.

At one point of the rescue mission, Hanuman had to simultaneously blow out five lamps located in five corners of Patala. He solved this problem by sprouting four extra heads: that of a boar, an eagle, a lion and a horse. With five heads he could blow out five lamps located in five directions easily. Eventually, Hanuman succeeded in rescuing Ram. He had transformed from an obedient servant to an astute independent decision-maker. He had transformed from Ram-bhakt to Maha-vir, from god (in lower case) to God (in upper case), worthy of veneration in his own right. Ram had thus created a leader.

A time comes in every leader’s life when he has to create leaders around him. This involves making people around him competent enough to take independent decisions. But this is not easy. Every decision has consequences, not all of them acceptable to a leader. It demands tremendous restraint and maturity on a leader’s part not to intervene and change the decision made by a junior.

Hanuman’s decision of burning Lanka displeased Ram. And so after that, Hanuman stopped taking decisions. To rectify the damage done, Ram had to remove himself from the scene so that Hanuman could rediscover his decision-making abilities. A leader need not agree with a junior’s decision. They are two different people and so may not see the same situation in the same way. But to imagine that the junior will think just like them, is many a leader’s folly. Sanjeev is one such leader.

Sanjeev’s brilliant decision making abilities have resulted in his becoming a partner in a consulting firm at a very early age. Now he has to nurture his managers and nudge them to take more responsibilities. One manager, Sebastian, on his own decided to follow up on the status of a business proposal with a client. “Why did you do that?” shouted Sanjeev, “It can put them off.” Another time, Sebastian gave a half day off to a management trainee who was feeling unwell. “Why did you do that?” screamed Sanjeev, “There is so much work to do.” After this, not wanting to upset his boss further, Sebastian stopped taking any decisions. He just did what Sanjeev told him to do. During appraisals, Sanjeev said, “You need to be more proactive,” to Sebastian’s astonishment, and great irritation.

Sanjeev wants Sebastian to be proactive but any signs of proactive behaviour is immediately reprimanded. As a result, Sanjeev is surrounded by obedient followers and no leaders. Sanjeev does not trust his managers unless they think exactly like him, which is impossible. Potential leaders, unable to handle Sanjeev’s demand for proactive behaviour followed by reprimand of all independent decisions, have left the organization. Sebastian is planning to leave too. And he will, until Sanjeev realizes that to groom leaders he has to allow them to take decisions and stand by them, no matter what. This indicates trust. Only in trust does growth happen.