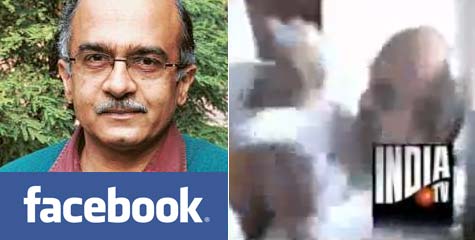 The Delhi Police is using Facebook to trace the accused who entered into a scuffle with Anna supporters outside the Patiala House Court on Thursday. A team of Delhi Police is keeping a close watch on the Facebook profile of Tejender Pal Singh Bagga, one of the three youth who were arrested for assaulting Prashant Bhushan. Bagga, president of Bhagat Singh Kranti Sena and its vice-president Vishnu Gupta were arrested from near Gurudwara Bangla Sahib when they were going to surrender.

According to the police, there are regular updates on his profile and someone is posting pictures of their group members regularly. “We have identified 10 members of Bhagat Singh Kranti Sena from Bagga’s profile, who were involved in the scuffle outside the Patiala House Court,” a police officer said. The profile has some old photographs where the same group is seen attacking other activists.” the officer added. The police said that they will initiate the process of arresting them. The police will now use these photographs as proof in court as the group itself has accepted its involvement in attacks on other social activists.