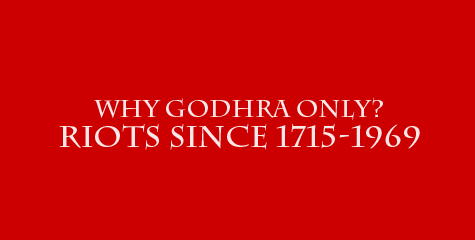 If we take the history of Ahmedabad for last five centuries, the city was ruled by Muslims and Mughals for about 340 years the rest by Marathas & The British coming to the incidents of communal riots during this era of five centuries, the major incidences are:

(1) 1714: Holi Riots: A Hindu named Hari Ram while celebrating Holi with his friends at his residence sprinkled ‘Gulal’ a red powder on one muslim, which was strongly protested by Muslims. A mob got assembled near Jumma Masjid under the leadership of Sunni Bohra Mulla Abdul Aziz. Afghan soldiers of the Muslim viceroy also joined the mob seeing the situation. A Kazi interfered for cooling down the angry mob. But the mob set on fire the house of this Kazi. The rioteers thereafter looted the shops of Hindu Mohalla, Shops and set their houses to fire. The rioters could be controlled only by armed guards of a Hindu, Kapurchand Bhanshali.

(2) 1715: Another Communal Riot: The 1715 communal riots were due to looting of shops of Hindus by Muslim soldiers. The riot came to an end with replacement of Muslim viceroy Daudkhan.

(3) 1716: Id riots: Consequently during the third year also, communal disturbances broke out during id in 1716. Bohra community Muslims gathered cows and buffallows for id celebration. A Muslim Havaldar just out of pity released one of such gathered cows. The Muslim protested before the Kazi Khairullakhan seeing no outcome to their expectation, the Muslims resorted to riots arson and mass looting of Hindu establishments. The situation could come to normally with Hindu viceroy Ajitsinh’s concerted efforts.

(4) 1750: Temple Demolition: 1750 riots by Muslims were provoked simply with an excuse that their Namaz was being disturbed due to noise of ringing of bell in the adjoining temple. The Muslims while returning from Masjid after Namaz, totally destroyed the temple and thus played with the Hindu sentiments.

(5) 1941: Riots: Communal disturbances broke out on 18th April 1941. The Muslims diverted to Muslim legue programmes after incidence of these riots.

(6) 1946: Rath Yatra Riots: 1st July, 1946, was a Rath Yatra day. Rath Yatra as usual was passing through Shaher Kotda Police Station Area, on this auspicious day. There took a hut exchange between a Hindu Akhada man and a Muslim watching the procession. The incidence turned into breaking out of communal violence, viz. arson, stone throwing, stabbing etc. There was also a police firing and curfew was finally imposed, to control the situation.

(7) 1965: Sikh incidence: The 1965 riots were resulted out of murder of two Shikh Rickshaw drivers by Muslims. The angrieved Shikhs took out funeral procession of both these dead bodies. The situation got disturbed at Delhi Darwaja and got converted into a communal riot soon.

(8) 1969: Historic Communal Riots: These riots were biggest of its type having taken lives of about 560 persons. It was 18th Sept. 1969, the last day of Urs. The violence crept up in the evening time on the ground that Jagannath Mandir cows going back to temple premises disturbed the URS. It may be mentioned that movement of cows was a daily routine irrespective of URS celebration taking place simultaneously. A hot discussion took place which provoked communal tension with a series of violent, incidences killing, linking, and soon in various parts of the city.