Who is responsible for Nellie massacre 1983 ? More than 3,000-odd people butchered 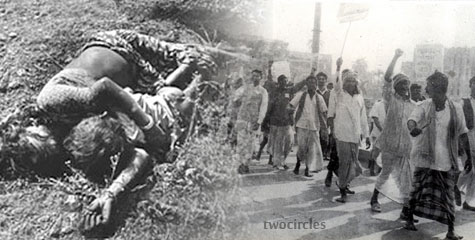 The anti-foreigners movement in Assam in the Eighties attracted the world’s attention to the issue of large-scale population migration from Bangladesh for the first time. But this migration was nothing new. In the early 20th century hordes of people from what was then East Bengal in undivided India migrated to the sparsely populated yet fertile Brahmaputra Valley.

They came in such large numbers that CS Mullan, an ics officer and the then census commissioner, observed in 1931: “Probably the most important event in the province (Assam) during the last 25 years — an event, moreover, which seems likely to alter permanently the whole future of Assam and… the whole structure of Assamese culture and civilisation — has been the invasion of a vast horde of land-hungry Bengali militants, mostly Muslims, from the districts of Eastern Bengal in general and Mymensingh in particular. It is sad but by no means improbable that in another 30 years Sibsagar district will be the only part of Assam in which an Assamese will find himself at home.”

Mullan’s prophecy did not come true as early as he predicted but at the turn of the century, the ground reality in most parts of Assam resembles what the ics officer had foreseen more than 70 years ago.

Today, the Assamese indeed finds himself outnumbered in at least nine districts; most of the state’s agriculture production and its vegetables are in the hands of the migrants. The migrant also makes up the largest chunk of labour force engaged in construction activities; over 80 percent of the state’s cycle-rickshaws are pedalled by the migrants. The truth is today’s Assam cannot do without this hardworking section of the population.

The flip side is that even politicians cannot do without them. The ruling Congress goes out of its way to appease the migrants and therefore wants to believe in the myth, perpetuated by its own propaganda machine, that there is no influx from Bangladesh. Sadly, the Asom Gana Parishad (AGP), midwifed by the once powerful All Assam Students Union (AASU), also did not do much to deport illegal migrants during its two stints in power.

What the Chiring Chapori Yuva Manch started in Dibrugarh is a manifestation of the latent feeling among the indigenous Assamese. For a while when the Yuva Manch launched its ‘boycott illegal migrants’ campaign in early May it seemed as if Assam was once again heading towards a repeat of the infamous Nellie massacre of 1983. In reality, more than 20 years after that incident which saw almost 3,000-odd people butchered one frenzied morning, the tide has turned. Muslims are no longer a minority. They are also politically savvy. Most of their leaders realise that their safety lies in numbers.

The change is apparent in Nellie. In 1983, the Muslims were outnumbered by the Tiwa tribals; today the situation has completely reversed. Says Mojen Konwar of Nellie, who was witness to the massacre, “What happened then cannot happen again because the minority has become a majority. There are bound to be problems in the coming years.” The wizened old man, however, hastens to add that the killing of the Muslims in 1983 was the handiwork of ‘outsiders’. Narayan Radu Kakati, chairman of the Tiwa Autonomous Council, meant to offer constitutional protection to the tribals, concurs: “Our people had no clue to the killings. It just happened as part of a larger conspiracy.”

The Muslims, however, are not interested in knowing who the killers were. All they know is that the best protection they can have in the areas is to become a majority. The large-scale relocation of Muslim peasants from neighbouring Morigaon and Nagaon districts has fulfilled that plan. Admits Mohammed Nuruddin Munshi, the all-powerful leader of the community in the area: “We now number about 12,000-14,000 as against barely 3,000-odd in 1983.” Mohammad Moinuddin, a 70-year-old father of 10 children, says he shifted from nearby Jagiroad to the Nellie area and bought several bighas of land to support his family. “With so many mouths to feed, I needed to get more land and the land was available aplenty here,” he says. Most of the land earlier belonged to the Tiwas who, for lack of enterprise, are simply selling it for short-term gains.

The root of the problem is in fact the alienation of tribals from the land. The Tiwas, hopelessly outnumbered now, say their land is being gradually bought over by the Muslims. “When people get Rs 30,000-40,000 per bigha, they simply sell their land,” says Suruj Konwar, a veterinary department employee. As a result, today Nellie’s demography has completely changed.

But most people have not forgotten the 1983 massacre. For Nuruddin’s elder brother Mohammed Tamiruddin, the memory of February 18 is as painful and vivid as if it happened yesterday. “Between 8am and 3pm that day, a mad frenzy had gripped the attackers. They came, armed with daos (matchet), country guns and lathis and surrounded us. First they started burning our hutments. We thought our lives at least would be spared but after a while the attackers started killing systematically. In our village (Basundhari) we lost 1,819 people that day. I and my brother Nuruddin were hiding in a pond. When the attackers started coming closer, we ran to the nearby railway bridge and hid there till the CRPF came to our rescue. Between us, we lost 26 family members,” Tamiruddin says, his eyes moistening at the painful memories.

After the killings, Nuruddin, then a 20-year-old having just completed his schooling in Arabic, began taking active interest in politics. Today he is the member of the Anchalik Parishad and a leader of the community.

Despite the harrowing experience he had to go through, he holds no grudges. “We have very cordial relations with our Hindu brothers here. There is no tension. In fact, 30 percent of our children study at a school located in a Hindu majority area,” he emphasises.

There may not be any tension but the residents are always alert. As the Tehelka team ventured into the interiors, leaving the NH37 passing through Nellie, word reached Nuruddin, who was some 10 km inside, that strangers were coming to meet him, courtesy the ubiquitous mobile phone. Someone had called up Nuruddin to inform about the strangers’ arrival. Afraid that something was wrong, Nuruddin waited for us near the mosque in the village instead of his house. Many others were around him as we reached the village square. The safety in numbers theory was very apparent.

As we talked, the tension gradually faded but it was clear that no newcomer could now enter the Muslim villages of Nellie without being noticed.

Clearly, Nuruddin and his fellow men have learnt from the 1983 experience. None of them want to be at the receiving end. Indeed, most people in Assam now know that the outcome of a Nellie repeat would be much different. That’s the ground reality today.

By Nitin A. Gokhale
Nellie, Assam