Puranas gave us the name HINDU not Muslim Invaders 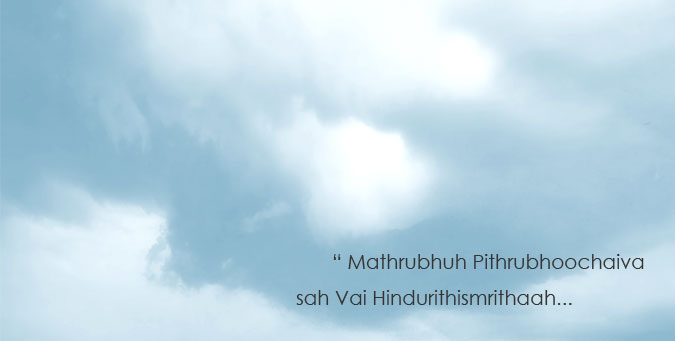 It is not Muslim Invaders who gave us the name 'Hindu', we were mentioned 'Hindu' by puranas several thousands years ago-proof!

Several thousand years ago, also called central India Hindustan, and the people who lived there Hindus. The following verse, said to be from the Vishnu Purana, Padma Purana and the Bruhaspati Samhita, is provided as proof, yet I am still waiting to learn the exact location where we can find this verse:

Another verse reads as:

Sapta sindhu muthal Sindhu maha samudhram vareyulla Bharatha bhoomi aarkkellamaano Mathru bhoomiyum Pithru bhoomiyumayittullathu, avaraanu hindukkalaayi ariyappedunnathu.
Both of these verses more or less indicate that whoever considers the land of Bharatha Bhoomi between Sapta Sindu and the Indian Ocean as his or her motherland and fatherland is known as Hindu. However, here we also have the real and ancient name of India mentioned, which is Bharata Bhoomi. “Bhoomi” (or Bhumi) means Mother Earth, but Bharata is the land of Bharata or Bharata-varsha, which is the land of India. In numerous Vedic references in the Puranas, Mahabharata and other Vedic texts, the area of India is referred to as Bharata-varsha or the land of Bharata and not as Hindustan. The name Bharata-varsha certainly helps capture the roots and glorious past of the country and its people.

Another couple of references that are used, though the exact location of which I am not sure, includes the following:

These again indicate that the region between the Himalayas and the Indian Ocean is called Hindustan. Thus, the conclusion of this is that all Indians are Hindus regardless of their caste and religion. Of course, not everyone is going to agree with that.

Others say that in the Rig Veda, Bharata is referred to as the country of “Sapta Sindhu”, i.e. the country of seven great rivers. This is, of course, acceptable. However, exactly which book and chapter this verse comes from needs to be clarified. Nonetheless, some say that the word “Sindhu” refers to rivers and sea, and not merely to the specific river called “Sindhu”. Furthermore, it is said that in Vedic Sanskrit, according to ancient dictionaries, “sa” was pronounced as “ha”. Thus “Sapta Sindhu” was pronounced as “Hapta Hindu”. So this is how the word “Hindu” is supposed to have come into being. It is also said that the ancient Persians referred to Bharat as “Hapta Hind”, as recorded in their ancient classic “Bem Riyadh”. So this is another reason why some scholars came to believe that the word “Hindu” had its origin in Persia.

Another theory is that the name “Hindu” does not even come from the name Sindhu. Mr. A. Krishna Kumar of Hyderabad, India explains. “This [Sindhu/Hindu] view is untenable since Indians at that time enviably ranked highest in the world in terms of civilization and wealth would not have been without a name. They were not the unknown aborigines waiting to be discovered, identified and Christened by foreigners.” He cites an argument from the book Self-Government in India by N. B. Pavgee, published in 1912. The author tells of an old Swami and Sanskrit scholar Mangal Nathji, who found an ancient Purana known as Brihannaradi in the Sham village, Hoshiarpur, Punjab. It contained this verse:

Again the exact location of this verse in the Purana is missing, but Kumar translates it as: “The country lying between the Himalayan mountains and Bindu Sarovara (Cape Comorin sea) is known as Hindusthan by combination of the first letter ‘hi’ of ‘Himalaya’ and the last compound letter 'ndu' of the word 'Bindu."
This, of course, is supposed to have given rise to the name “Hindu”, indicating an indigenous origin. The conclusion of which is that people living in this area are thus known as “Hindus”.

Note: Content of this blog post is writer's personal opinion and may not be IBTL.in or IBTL's view.