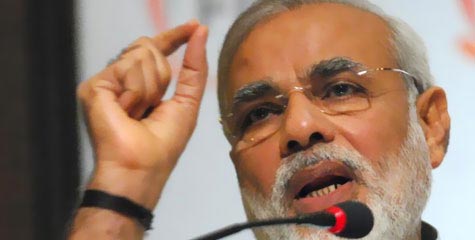 Modi, giving his reaction to Gujarat civic-by-polls result today tweeted, “thankful to voters for reposing faith in BJP in the civic by-polls across Gujarat. Hearty congratulation to the candidates.”

Modi specially mentioned the result of Ahmedabad Municipal Corporation’s Mahavirnagar ward by-poll as it is a part of Modi’s own Maninagar assembly area.

He tweeted, “in my constituency Maninagar, victory margin tripled despite strong attempts by state Congress leadership. My special thanks to Maninagar voters.”

Entire detail of 4 December 2011 polls of over 100 seats is out. The elections(general election, by-polls and midterm polls) were held on over 105 seats, of them BJP has secured 65 seats, while Congress has won 39 seats. Independent candidate gets only 1 seat.

BJP retains Vapi and Kanakpur-Kansad municipalities. In Vapi, the party is in better position compare to 2006 polls. BJP has won 34 out of total 42 seats. In 2006 BJP won 27 seats in Vapi.

BJP has secured victory over Kanakpur-Kansad municipality but with lower margin. In 2006 BJP won all 21 seats of Kanakpur Kansad, but this year the party won 11 seats, leaving 10 seats for Congress.

BJP has retained two seats in Ahmedabad and Vadodara.