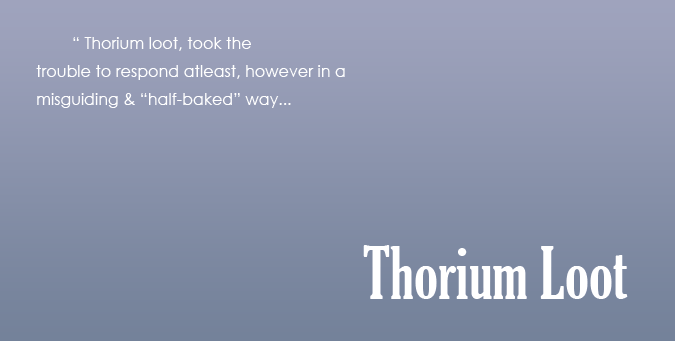 It is really a good feeling that The Department of Atomic Energy (DAE) on reports of thorium loot, took the trouble to respond atleast ,however in a misguiding & “half-baked” way. But that part can be forgiven, given the fact that DAE is the agency at first place in the dock. So such face-saving act is natural. My kudos to DAE is for being so sensitive as most of govt agencies has turned these days so thick-skinned that even court-rullings are effect-less; what to say about media-reports.

So in a press release (dae.nic.in/writereaddata/pr070512.pdf) of two pages dated 19th of Oct,2012 from Anu Shakti Bhawan, CSM Marg, Mumbai, DAE assures nation in a way that there is no such loot of thorium ever took place as being propagated in certain section of media. As well as the “price-less” thorium reserves of our nation is in safe handling beyond any doubt.

In this press-release it is very interesting to see that how DAE has cunningly managed  to escape touching the un-comfortable points regarding the whole episode and tried to present a “every thing is ok” scene to nation giving half-truth facts. Here after perfect 30 days, is open letter giving a point to point rebuttal of the press release giving a clean chit against accusations of thorium loot; which in turn easily shows that this press release was more a “clean cheat” than a “clean chit”

It is really a good feeling that DAE on reports of thorium loot, took the trouble to respond at least. However it has been painful to see that DAE has given misguiding explainations and presented half truths in it’s press release. I hope you will prove me wrong upon giving satisfactory, factual and reliable reply to my  paragrapgh-wise observations/objections and queries which are being given below :-

“Recently, some sections of the media have alleged that private companies have been allowed to export millions of tons of monazite, and that India has lost large quantities of thorium, worth several lakhs of crores of rupees, through such export. This information is not true.”

- Here DAE seems to be in hurry to transfer the whole blame to media that too in an incorrect manner. Media reports has never said that thorium/ monazite as it is, has been allowed to export. Infact mostly all reports lebel the charge that monazite is being illegally mined & exported under shield of other rare earth minerals or beach-sand minerals like garnet, ilmenite, leucoxene,rutile, sillimanite and zircon etc mining & exporting licences.

Here what DAE tries to hide that the most questioned thing in entire thorium scam episode is the amendment of 20th January, 2006 itself (To know more please go to my thorium scam-part 3). DAE should clarify that for what purposes first time in history of Indian Atomic Energy Act, 1962- It’s “prescribed substances” list is changed. Thorium in our country is found in beach sand. After realizing the potential of thorium in our Three stage Nuclear Programme ,export of thorium was instantly banned. Although given the anonymous presence of thorium in our beach sand and it’s vast area covering the whole costal line in east & a major part of western costal area too, there always was a possibility of exporting thorium in name of beach-sand. To close even that possibility the whole beach-sand was included in prescribed-substances list by first prime minister of India-Pt Jawahar Lal Nehru and the drafter of Indian Nuclear Plan Prof. Bhaba. In wake of above DAE should also clarify that under what circumstances it is forced to deem that such possibility doesn’t exist now and thus went for such amendment where beach sand excluded from the prescribed-list.

“DAE has not issued any licence to any private entity either for production of monazite, or for its downstream processing for extracting thorium, or the export of either monazite or thorium. Export of the beach sand minerals (not monazite), falls under Open General Licence and does not require any authorisation from DAE.

Since the other beach sand minerals and monazite (which contains thorium) occur together, companies   handling beach sand minerals have to get a licence under the Atomic Energy (Radiation Protection) Rules 2004 from the Atomic Energy Regulatory Board (AERB). As per the licensing conditions, the licencee, after separating the beach sand minerals has to dispose of the tailings, which contain monazite, within its company premises or as backfill, depending on the monazite content. These institutions are under strict regulatory control. They send quarterly reports to AERB stating the amount of tailings disposed of safely either in the premises or as backfill. Inspectors from AERB survey these areas to ensure that the licensing conditions are met. Export of monazite without a licence from AERB is a violation of the Atomic Energy (Radiation Protection) Rules 2004.”

- It is quite surprising that despite of the claim of DAE that all thorium extracted by license holder companies under open general license category; has been certainly submitted back to IREL, ground situation is not so matching. Many of the IREL official has accepted off record that  due to heavy mining by these companies it is nearly impossible to keep eye for all thorium. We have to rely on the data provided by companies itself as no other choice.

Too add more- collective beach sand exported by such companies as reported officially in their website counts in millions. Thus with 9% availability it comes to- atleast around 1,90,000 tonnes of thorium deposited to IREL as per the claim made in above paragraphs. Can DAE acknowledge this figure and assure nation that this amount of thorium has been recovered from companies under open license category?

4. The last paragraph of the press release states:

“The information available in IAEA documents, about the national nuclear programmes of different countries, does not give any indication that any country, other than India, is planning significant use of thorium either in the reactors currently under operation or in those being considered for deployment in the near future. Hence, it is unlikely that there is a demand overseas for large amounts of thorium.”

It seems that DAE source of information are either in-competent or incomplete. There has been a very linear expansion of activities regarding thorium in international scene or overseas in your language in recent 3-4 years. A simple google search also can help DAE in this regard. Some are being given here-

In wake of above activities that are even traceable in internet, will DAE leave this state of ignorance & arrogance & take the trouble to raise the issue before appropriate authority in GOI and also check the possibilities of any linkage of these sudden increased activities in international scenario to indian land?

We hope soon I will hear a reply from DAE on above raised points.