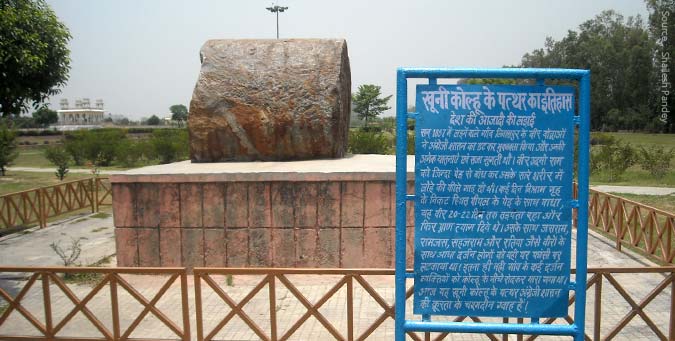 I still can’t figure out why I wrote those “dates” , maybe I was trying to give a structure to my thoughts. Thoughts which were too mixed up, but then I decided to start writing with a hope that they will sort themselves out. Here I would mention that I am no historian and have no expertise to claim factual correctness and I am sure that all the readers are going to discount for this weakness of mine !!

1857 : Liwaspur , Haryana … Udami Ram (A Govt official –nambardar) organizes the local populace to take on the British forces. A small group of 22 brave hearts are always on the lookout for British Forces and vanish after attacking them swiftly with their makeshift weapons. And as it has happened most of the times in our freedom struggle, they are caught when a traitor betrays them for a reward. In keeping with their best traditions, British subject entire village to unimaginable tortures, crush all the young men under big stones meant to level roads. No one survives. Then they turn their attention to Udami Ram and his wife whom they have already subjected to inhuman tortures and nail them to a Pipal tree near the rest house at Sonepat. The torture continues unabated. They succumb 35 days later and their bodies receive a similar treatment as other people, they are crushed to pulp under those stones. And thus ends an uprising by COMMON PEOPLE.

June 2011 : Some where in Haryana … I was passing Sonepat on my way to Punjab and I saw a big stone kept in a Park named “Tau Devilal Park”. I was curious why they should keep a stone so carefully in a park, so I stopped and decided to see for myself. What I came across has been produced above. And I decided to know beyond what was written on the plaque there. This took me to Liwaspur, Udami Ram’s village. And this was where I was SHOCKED. Time has stopped for the villagers. They still live in 1857!!

The traitor who betrayed Udami Ram was rewarded with the ownership of all the land. Till today the Gram Sabha of this village has no Land and the cases continue in court. Until recently, the traitors family were “traditionally” the nambardaars of the village. All the requests petitions to EVERYONE have fallen on deaf years. The family of Udami Ram lives in a pathetic condition. Its hard not to notice the gloom that surrounds the village, the hopelessness is palpable. I felt that too, but I guess it was to be so, since they had no Udami Ram alive, who would take up their cause and fight for them. And in his absence, future generations of the martyr had forgotten almost everything to join ranks with COMMON PEOPLE.

December 2012 : New Delhi … A Girl is subjected to inhumanly torture and thrown on streets. After fighting with her injuries and massive infections, she succumbs 12 days later. Massive protests erupt demanding justice. The demand is “nothing” when seen in the backdrop of the “might” of the Govt. They could easily engage with protestors and assure justice, but they don’t. They come down heavily on these people using every way to crush them. Their lackeys masquerading as “intellectuals” and well “entrenched” in the editorials of newspapers and in the TV shows, shout out to the citizenry that these protests were nothing but an attempt by some fringe, lumpen elements, out to destabilize Government by spreading rumors and chaos. Citizens are falsely implicated, arrested and the “rulers” make sure that EVERY VOICE is silenced. And most of us are left wondering about whether the “People” in the Preamble of our constitution means elite few or the COMMON PEOPLE!!

Sure we have attained freedom but we really need to be free of the “ways” that were passed on to us by our “rulers” who don’t rule us anymore but whatever is done to the populace and the manner in which they are treated does gives an impression of an invisible hand. A hand that was always there, will always be there to make sure that WE as a nation keep paying for 1857.