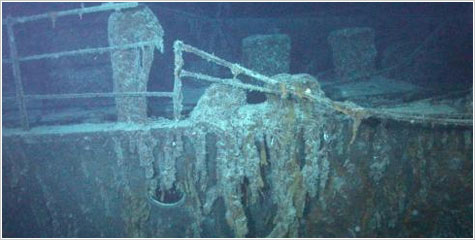 TAMPA, Florida (AP) – A Florida deep-sea exploration company with a record of finding sunken treasure says it has discovered a ship filled with silver 8,000 feet beneath the North Atlantic Ocean.

Odyssey Marine Exploration (OMEX) said it found the remains of the SS Mantola, which sank Feb. 9, 1917, after being torpedoed by German submarine U-81 during World War I.

The ship was insured to carry silver worth 110,000 British pounds when it sailed in 1917. That value would mean it could hold as much as 600,000 ounces of silver — nearly 19 tons — based on silver prices at the time. Odyssey will retain 80% of the value of the silver that's recovered. At current market prices, that much silver would be worth more than $19 million.

The company is preparing a recovery expedition that's planned to start next spring. It said its share of the proceeds will contribute significantly to funding future operations.

The shipwreck is about 100 miles from an earlier one found by Odyssey. The SS Gairsoppa sank in 1941 carrying a reported cargo of up to 7 million ounces of silver. Odyssey announced that find last month.

The Tampa-based company, which uses remote-control underwater vehicles to locate and salvage wrecks in some the deepest water ever explored, is embroiled in a protracted legal fight with the government of Spain over 17 tons of silver and other treasure salvaged from the wreck of a sunken galleon in 2007.

Odyssey made an international splash when it flew the treasure back to Florida in May 2007. The Spanish government immediately filed a claim in federal court saying that it never relinquished ownership of the Nuestra Senora de las Mercedes and its cargo.
The federal court sided with Spain. Last month, a three-judge panel of the 11th Circuit Court of Appeals in Atlanta affirmed the decision, but Odyssey has asked for another hearing before all the court's judges.

The treasure, which has been estimated to be worth as much as $500 million, is still in Odyssey's possession in an undisclosed location.