All Pakistani kids learn to hate Hindus in school books 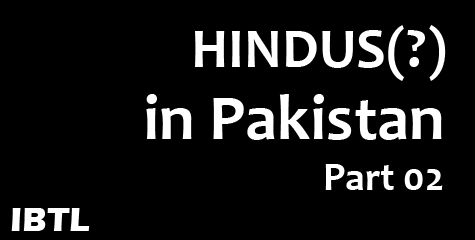 The United States Commission for International Religious Freedom conducted a detailed study of what actually causes this to happen in Pakistan. The report reveals shocking facts that educated Indians, who’re administered a heavy dose of secularism by the time they grow up, otherwise simply refuse to admit when the same facts are presented by Hindu organisations.

The USCIRF report acknowledges that “a large portion does not understand minority citizenship rights and are wary about them ever holding public office… Religious minorities are often portrayed as inferior or second-class citizens who have been granted limited rights and privileges by generous Pakistani Muslims, for which they should be grateful, and to whom religious minorities should be subservient".

"Hindus are repeatedly described as extremists and eternal enemies of Islam. Hindu culture and society are portrayed as unjust and cruel, while Islam is portrayed as just and peaceful." The few references to Christians "seem generally negative, painting an incomplete picture of the largest religious minority in Pakistan," while Jews are depicted as predatory moneylenders.

"Pakistan and Social Studies textbooks are rife with negative comments regarding India and Great Britain, but Hindus are often singled out for particular criticism in texts and in interview responses," said the report. The Islamisation of text books, the Commission has said began under the army rule of late dictator Zia-ul-Haq who courted Islamists to support his rule.

"This study documents how Pakistan's public schools and privately-run madrassas are not teaching tolerance but are exacerbating religious differences," said Leonard Leo, US Commission on International Religious Freedom chair.

In fact, the systematic slanting of the state prescribed curricula for all levels of the public education system in Pakistan was exposed in great detail by a comprehensive study report published by the Islamabad-based Sustainable Development Policy Institute way back in 2002. Titled "The Subtle Subversion: The State of Curricula and Textbooks in Pakistan" and jointly written by A H Nayyar and Ahmed Salim, the report had concluded that the Pakistani textbooks that form part of the present public school curriculum are lessons in bigotry, hate and a gross misrepresentation of history. It added that the curriculum wing of the Pakistani federal ministry of education has somehow become the principal source of what can only be termed as 'hate literature'. The report asserts that the national curricula and the officially mandated textbooks in the subjects of Social Studies, English, Urdu and Civics from Class I to Class XII have contained material that directly encourage students to take part in jihad and martyrdom.

A textbook of Pakistan Studies claims that Pakistan "came to be established for the first time when the Arabs under Mohammad bin Qasim occupied Sindh and Multan'; by the 13th century 'Pakistan had spread to include the whole of Northern India and Bengal' and then under the Khiljis, Pakistan moved further south-ward to include a greater part of Central India and the Deccan'. The spirit of Pakistan asserted itself', and under Aurangzeb Alamgir, the 'Pakistan spirit gathered in strength'; his death 'weakened the Pakistan spirit'.

According to the Minorities Concern of Pakistan, students are encountering problems because of their minority status and faith. They are forced to study from textbooks and curricula that are biased against them and routinely face discrimination and intimidation from Muslim students and teachers.