Sexual abuse in the Roman Catholic Church in Netherlands 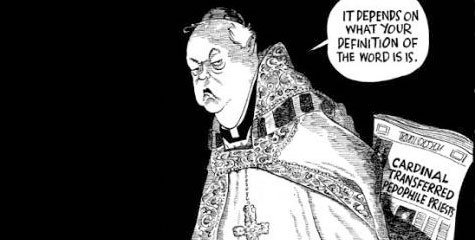 Arnab Goswami takes on Ashutosh and Aam Aadmi Party
The Hague, February 18: In the wake of the "Sexual Abuse Epidemic" unearthed in Roman Catholic Church in Netherlands, the Deetman Commission is to conduct a follow-up investigation into sexual abuse in the Roman Catholic Church. The commission was set up last year under the leadership of former Dutch government minister Wim Deetman to investigate allegations of abuse dating from 1945 in Netherlands.
In December 2011, while revealing his first report which shocked the world about the reality of inside church scandalous activities, Deetman said that the problem of abuse continued in part because the Catholic Church organisation in the Netherlands was splintered, so bishops and religious orders sometimes worked autonomously to deal with abuse and “did not hang out their dirty laundry”. However, he said that the commission concluded that “it is wrong to talk of a culture of silence” by the church as a whole.
The new investigation will examine the fate of girls and women, according to Security and Justice Minister Ivo Opstelten. The Dutch Justice Minister believes that the church itself must determine what is investigated. He also sees a separate investigation by the government on violence in the church is not. "The prosecution will examine if there is reason for it, even if facts may have been barred."
The report published late last year by the Deetman Commission was not specifically restricted to boys, but the Dutch parliament took the view that the position of girls and women was not covered thoroughly enough. Wim Deetman recognizes that it would be a good idea to examine the abuse of this group separately.
According to the Dutch Justice Minister, church directors have approved the additional research. Mr Deetman expects it will be ready this autumn.

Former government minister Deetman concluded late last year that an estimated 20,000 children have been abused in Catholic institutions. Directors of the church covered up the abuse and gave hardly any help to the victims. Dutch Catholic sexual abuse was revealed in the report.
Thousands of children suffered sexual abuse in Dutch Catholic institutions, and church officials failed to adequately address the abuse or help the victims, according to a long-awaited investigation.
The report said Catholic officials failed to tackle the widespread abuse “to prevent scandals”. The suspected number of abuse victims who spent some of their youth in church institutions probably lies somewhere between 10,000 and 20,000, according to a summary of the report.
Based on a survey among more than 34,000 people, the commission estimated that one in 10 Dutch children suffered some form of abuse. The number doubled to 20% of children who spent part of their youth in an institution whether Catholic or not.

Related : Catholic church making money by producing and selling porn
The commission said it received 1,800 complaints of abuse at Catholic schools, seminaries and orphanages and that the institutions suffered from "a failure of oversight". It then conducted the broader survey of the general population for a more comprehensive analysis of the scale and nature of sexual abuse of minors.
The investigation followed allegations of repeated incidents of abuse at one cloister that quickly spread to claims from Catholic institutions across the country, echoing similar scandals around the world.
The commission identified about 800 priests, brothers, pastors or lay people working for the church who had been named in the complaints. About 105 of them were still alive, although it was not known if they remained in church positions, the report said. It identified them as "perpetrators" rather than "offenders", meaning they had not been proven to have committed a crime.
According to the Dutch Central Bureau for Statistics 29% of the Dutch population of 16 million identified themselves as Catholics in 2008, making it the largest religion in the country.
Source and image copyright  : newsbharati