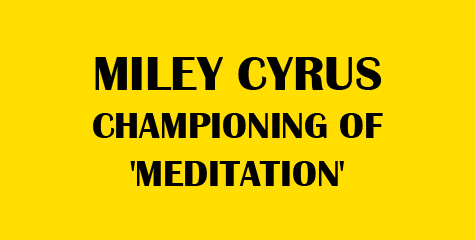 In a recent television program “The Conversation with Amanda de Cadenet”, she urged other girls to “Wake-up…be by yourself, go meditate, go spend 10 minutes like really looking at yourself”.

Distinguished Hindu statesman Rajan Zed, in a statement in Nevada (USA) today, commended Cyrus for endorsing meditation to younger generations who could easily get lost amidst so many distractions in the consumerist society. It was a “step in the right direction” to make positive changes in the lives of today’s youth, Zed added.

In the past, Cyrus apparently expressed belief into the concept of reincarnation when she mentioned in a Tweet: “For my next life can I please come back as some form of marine life?” She reportedly carries a tattoo of Hindu religious symbol ‘Om’ on her right wrist and ‘karma’ is tattooed on her right index finger. She has licensed an online “Miley’s Meditation” game which shows animated Cyrus meditating.

Zed, who is President of Universal Society of Hinduism, pointed out that Hinduism had been associated with meditation for ages. There were various aspects of it, including pratyahara, upasana, samadhi, manana, dhyana, dharana.

Welcoming Cyrus’ interest in concepts and symbols of Hinduism, Rajan Zed invited her to look deeper into the rich philosophical thought which Hinduism, oldest and third largest religion of the world, offered.

Also Read # Celebrities who accepted Hinduism, Believes Hinduism is a way of life