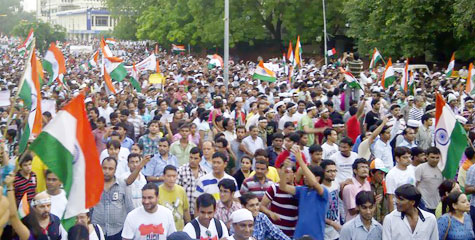 EXPRESSING solidarity with veteran Gandhian Shri Anna Hazare, who is on fast at Ramlila Grounds of Delhi since August 16, nearly 4.17 lakh college students belonging to Akhil Bharatiya Vidyarthi Parishad (ABVP) took part in the rallies organised in Karnataka alone on August 17. In Bengaluru, around 80,000 students from over 200 colleges hit the streets shouting slogans against Congress-led corrupt UPA regime.

The call of college bandh given by the ABVP on August 18 also received the support of unprecedented magnitude from all over the country.

The Vishwa Hindu Parishad and the RSS also strongly condemned the arrest of Shri Anna Hazare and warned the government against the murder of democracy. VHP president Shri Ashok Singhal condemned the arrest of Shri Hazare in strongest words. He described his arrest as the insult of people’s sentiments and democracy. He said the government action reminded the black days of Emergency. He said after crushing the peaceful agitation by Baba Ramdev in Ramlila Maidan, this government again wants similar treatment to other people also. He called upon the countrymen to come out from their houses against this dictator government.

According to Shri Anil Kumar, organising secretary of Mangalore ABVP, an unprecedented gathering of students was reported from Mangalore, Kodagu, Udupi, Gulbarga, Hubli and some other northern Karnataka cities on August 17. ABVP activists successfully closed down all the colleges condemning undemocratic arrest of Shri Anna Hazare and demanding immediate dismissal of the corrupt UPA government. The ABVP activists protested in huge numbers all over the State at 189 places wherein a total of 4,17,700 students participated.

Describing the arrest of Shri Anna Hazare as nothing but murder of democracy in day light, ABVP warned against the evil intension of UPA to impose Emergency in the country again. “The country needs a strong anti-corruption law such as Jan Lokpal Bill and not the Congress Joke Pal Bill. It’s high time to tackle and uproot corruption for the country. ABVP wants the Prime Minister too should be into the ambit of Lok Pal as the law must be equal to all, from ordinary citizen to the PM,” the ABVP said in a statement. (FOC)

IN a statement released in New Delhi on August 15, RSS Akhil Bharatiya Prachar Pramukh Dr Manmohan Vaidya said the decision of Central Government not to allow Shri Anna Hazare to observe hunger strike against corruption is unfortunate and anti-people. “Rashtriya Swayamsevak Sangh strongly condemns this adamant attitude of the Central Government and extends its full support to the agitation led by Shri Anna Hazare. Instead of adopting the path of dialogue, ridiculing the widespread support of the people to Anna Hazare’s agitation and creating a confrontationist atmosphere by the Government is unwarranted and improper,” the statement said.

Meanwhile talking to mediapersons in Ujjain Dr Vaidya said the RSS supports all agitations being conducted against corruption and wants that all the organisations fighting for this common cause should join hands.