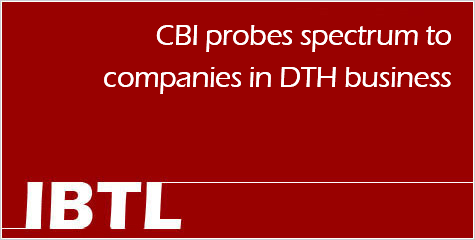 CBI has widened its probe in the 2G spectrum scam and has now turned to investigate spectrum allocation made to direct-to-home (DTH) broadcasters by seeking details of sanction of bandwidth. The decision to probe the DTH broadcasters was taken after agency found that some of the telecom companies, under probe in the 2G scam, were also broadcasters of the service. The CBI had sought details including the original files containing applications for assigning of spectrum and wireless operating licence for DTH services.

While Dish TV and Doordarshan are not into telecom business, Bharti and Tatas, which are there, have not been made accused in the 2G scam. Other than that, CBI has charged DMK MP Kanimozhi of having got Kalaignar TV in the Tata Sky bouquet in conspiracy with former telecom minister A Raja. CBI has also charged Reliance Telecommunications with criminal conspiracy and cheating in the 2G case.