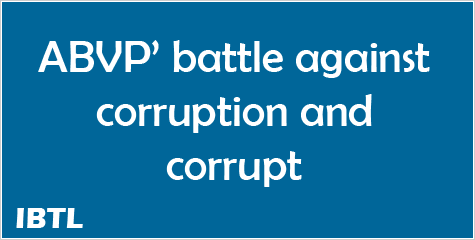 Under the campaign more than one lakh students will come on the streets at more than 2,000 district centres of the country and will demonstrate outside the respective collectorates. Under first step of the battle, Union Home Minister P Chidambram will be targeted for his involvement in the 2G Spectrum case. The ABVP said P Chidambaram has no moral right to stay in the Cabinet. The decision to this final battle was taken at the recently concluded 57th national convention of ABVP in New Delhi.

Till now the ABVP was conducting awareness drives all over the country against corruption. A national body, Youth Against Corruption, was also formed for this objective. The main theme of the recent national convention was also rampant corruption. “There was a retrospection of all the earlier protests, agitations and events that took place after the commencement of Youth Against Corruption and new resolutions were brought forth. The ABVP demanded immediate resignation of the Congress led UPA Government that has disintegrated to level that they fail to distinguish between the good and the bad,” said Shri Umesh Datt Sharma in New Delhi on January 7.

Talking to Organiser Shri Sharma said in the coming year the organisational set up of the YAC would spread to village level. The final battle against corruption would also be taken up to the village level. He said keeping in view the evidences against P Chidrambaram in 2G Spectrum case, he should be made a co-accused in the case and he should be removed from the Cabinet immediately.