CAG report on Modi - what the media didn't tell you, Kanchan Gupta decoded 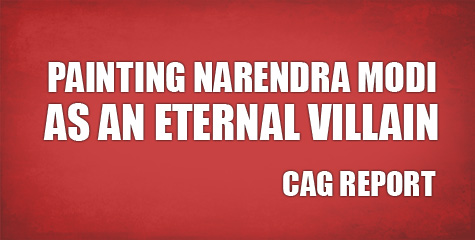 Kanchan Gupta, a senior journalist and also a columnist with The Daily Pioneer has written an excellent piece which highlights how the main-stream media which takes its notoriety to a higher notch each time, played with the facts to selectively report the CAG findings and created an impression as if there was massive corruption going on in Gujarat.

In that piece, Kanchan writes that the Gujarat government did not try to fudge facts that certain PSUs did incur losses but the reasons that the government has given must also be taken in to consideration. For example, the Gujarat State Road Transport Corporation has been incurring losses, but the reasons are that it is serving the remotest village and many routes are not financially viable. The frequent increases in the price of diesel have increased the losses since the corporation has not correspondingly increased the fares looking to the larger public interest. This certainly appears to be a genuine reason. Had the State bus fare been increased because the Diesel Prices increased, the same people who're now cursing Modi government for this loss, would have been cursing him for burdening the poor.

Gujarat government has already pointed out the following points from the same CAG report but the biased media, hell-bent on painting Narendra Modi as an eternal villain, has not reported them. Below are the points as mentioned by Kanchan Gupta.

# The CAG has noted the quantum increase in the investments made by public sector undertakings as well as the overall profits earned by them in Gujarat.

# The investment in Gujarat State PSUs has gone up from Rs 48,137 crore in 2008-09 to Rs 67,352 crore in 2010-11, reflecting the increased investments in power and irrigation sectors which contribute significantly to crucial infrastructure.

# The CAG’s reports record the improving financial parameters of the State PSUs. What is impressive is that the return on capital has gone up from 4.4 per cent to 5.24 per cent in the last five years.

# The debt to turnover ratio has been substantially reduced from 2.72 to 0.43 in the same period.

# The CAG in its reports has noted that the overall accumulated profit / loss figures of the functioning State PSUs have shown steady improvement over the past six years and the accumulated losses have been wiped out, indicating overall improvement in performance of these PSUs.

# The guarantee commitment of the State Government to PSUs has decreased from Rs 6,694 crore in 2008-09 to Rs 4,960 crore in 2010-11. This reflects the increasing emphasis on self-reliance and credit worthiness of these PSUs.