Prime Minister represents Assam, but did nothing for North East 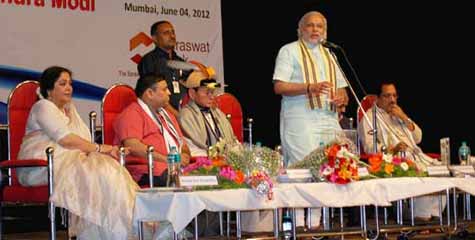 Ahmedabad, Monday: Gujarat Chief Minister Narendra Modi today strongly criticized the Central Government for neglecting the unique culture and aspirations of the people of the Border States and particularly the eight North-Eastern States.

Presenting the ‘One India’ cash award of Rs. one lakh and citation to Nabam Atum for his lifelong services to the region at a function organized by My Home India in Mumbai, he said that Prime Minister Dr Manmohan Singh himself represented Assam for long but did precious little for the development of the region.

He pointed out that uranium is found only in the NE, but has not been mined for unknown reasons.

Mr. Modi hailed the undaunted spirit of Nabam Atum of Arunchal Pradesh for promoting his religion and culture despite himself suffering from throat cancer. While the people in the NE are known to be very reserved about their citizenship, he waged a movement and took upon himself the task of instilling patriotism and integration in the region.

Had Sardar Patel been alive today, he said, there would not have been any need to launch any movement for national integration. He blamed the late Indira Gandhi for fomenting divisive politics on religious lines in the NE. Frequent infiltration of people and smuggling of arms from across Bangladesh border is being allowed as part of the Central Government’s vote bank politics.

Reminiscing his travel days through across India, he said that Kutch in the west and North-East are better connected by mobile phones and TV channels of Pakistan and China respectively. India doesn’t seem to have learnt any lesson from Chinese war of 1962 and later incursion in Arunachal Pradesh. No nation can afford to neglect its border, but Government of India has not done anything about it.

Mr. Modi said there is need for cultural exchange and unity among different states. India has neglected even the sacrifices of the freedom fighters of NE states. At a meeting of the National Development Council, he has invited security forces from the NE on deputation to Gujarat but didn’t get response.