All India convention for Establishment of the Hindu Nation : Rashtra Dharma 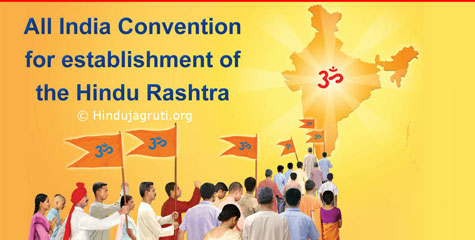 Ramnathi, Ponda (Goa) : ‘All India Convention’ is being organized here between 10th to 14th June 2012 with the purpose of ‘establishment of Hindu Nation’. More than 225 devout Hindus comprising leaders of various organizations, scholars, thinkers, advocates, editors etc. who are committed to the mission of protection of Hindu Nation and Dharma, will be participating in this Convention. It is one of the very rare occasions that leaders of pro-Hindu organizations are coming together like this and it is also historical from all angles because such ‘all India Convention’ has not taken place in the past 125 years.

Objective of this convention : The main objective of this Convention is to commence the process of establishing the 'Hindu Nation'. From all perspectives, it is going to be a historic Convention, for it will be the first of its kind since our Independence. This Convention will provide direction to Hindu unity at the national level in future.

Reactions from prominent Hindus : Yesterday I read about the news of press conference held prior to start of Convention in daily ‘Sanatan Prabhat’. Congratulations, with lot of appreciation, to Hindu Janajagruti Samiti (HJS) for organizing such Convention and to daily ‘Sanatan Prabhat’ for publishing matter about the same! Hindu Mahasabha used to hold Convention when Veer Savarkar was alive and that used to be called as Hindu Convention. Later, such Convention was never held. Now, HJS took a very bold decision to organize ‘All India Hindu Convention’ for establishment of Hindu Nation as was envisioned by Savarkar. I feel happy and proud.

Savarkar’s definition of ‘undivided’ Hindustan was for Hindus and with Hindus; now a new hope has been aroused to achieve this goal. Many congratulations for such bold decision! Best wishes for the whole mission and Convention!
List of the Dignitaries