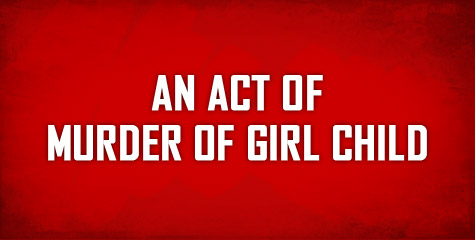 There can be many who can sell their celebrity status & popularity for having more money, but only a few can use that popularity to bring about a change. I am really happy that such hush hush issues are getting discussed in open now on TV. The ancient Indian system of thought has given women such an exalted status in Indian society. There was no Yagna which could be completed without the presence of the wife, there was so much freedom for women that they had the right to choose their husband through Swayamvar. The women participated in battles along with their husbands. Remember Kaikayee & Raja Dashrath story from Ramayana? The ancient Indian thoughts revolved around "Yatra Narastu Pujyante, Ramante Tatra Devtah" means "where women are worshiped only there the gods will reside" and "Janani Janmabhumishcha Swargadapi Gariyasi" meaning that "mother & motherland are better than place in heaven".

It's such a pity & shame that people are indulging in an act of murder of girl child in such modern times, and why is it like that? It's the thinking of paying dowry and not having a feeling that children of the daughter would carry on the legacy of the family forward. It's simply ego and financial consideration often. The Kanya Dhan or dowry in today's term was the system where the parents used to give a portion of their wealth to daughter so that she can use it in time of crises after marriage as daughters didn't use to inherit father's property, mainly because, the property used to be in the form of land and other immovable assets which she could not take away with her at the time of wedding. But now, we have a law in place which says that daughters have equal right to father's property. I think it's more of
a financial and ego satisfaction problem where the father & in-laws and sometimes mothers themselves think that daughters are nothing but just a burden. But I really wonder that the society which worships the women in all its form has become so cruel as to murder the new life. The land where Shiva & Shakti are worshipped together as one form can't indulge in such crime against humanity. I always believed that human beings are just sophisticated version of animals. Only few can get over this animal instinct forever and they become the likes of Vivekanand. Some can just suppress it for long and they wait for this to come out from time to time. Few will always remain that primitive animal and become worse than animal at times.

Hearing stories of Parveen and other females on Satyameva Jayate just made me feel that Human at large were worse than animals. The Animals primarily kill for satisfying the hunger of stomach, but humans are so much worse. The more educated we become, the worse animal we are becoming. I cried and cried time and again, watching the show. The song in the last part of the show just broke me from within and I again cried uncontrollably. Deep within, the volcano got erupted and I wondered how we are becoming so callous as a society. We have become so hypocratic in our approach and thoughts. We have become masters in putting makeup on our face and hiding the demon inside us from outer world and the issue is we don't even feel guilty after doing such acts. We are justifying our greed and the end results for our demonic and inhumane behavior. I take a pledge to spread awareness on this issue, I was already doing it through various limited means but I promise that I will work more. The solution for this problem comprises mainly the following:

2) Long term solution could be:

a. Spread awareness through various possible means- have the religious scholars and organizations issue the dictates in support of girl child.
b. We should have lessons on morality till all post graduation level of education. It should be taught as compulsory subject in all types of colleges.
c. Change the property inheritance & dowry related laws. It should be mandatory for father to share the ancestral property equally among all his children & the father's property should always be in Girl's name or her offspring's name. His individually earned property can be distributed as per his will.
d. The companies which sell the machines should be asked to develop an inbuilt system, which cant be tempered with, which can keep the log of all the activities for 6 months. Every six months, the companies need to perform check up of those machines and send out reports on their websites regarding the same as for what purpose their machines got used for. If any case related to sex determination comes up, they need to do enquiry about for which purpose it was done.

Additionally, there are few other issues that I would love to see on Satyameva Jayate. All these issues if resolved can go a long way in making India a developed
nation soon-

1) Issue related to Intercaste Marriages (I dont support same gotra Marriage- Gotra & Caste are different things and same gotra marriages have biological implications). The curse of casteism is responsible for many ills in India.

2) Issue of inter-religious marriages - Aamir himself is one of the examples (albeit controversial) of how these type of marriages should be. If someone converts the religion of other individual before marriage and than marry him/her than it's not love in my opinion.

3) How to bridge gap between north-south-east-west India and make it more like one India, how to make national identity as supreme and other caste, religion & religious identity as non issues.

4) Reservation on economic basis. The caste based reservation is promoting lots of ills. The reservation or affirmative action is needed but its basis needs to be changed. Making it on economic basis as its the common denominator would be the only positive solution. You can keep on relaxing some rules for scheduled tribe candidates. But reservation in promotions is such a stupid thing and there should be some affirmative action from private sector but the private sector should not be forced for any kind of reservation. There are many more ideas on this topic.

5) How to remove corruption from daily life? Janlokpal is needed but what we all can do as individual to stop this like taking a pledge of no bribe to any one, neither in trains for seats, nor in any govt office for getting your work done. We give it easily thats why the officers expect it from us.

6) Remove the practice of open defecation from India by providing clean toilets to all villages & towns. This is a cause in which support of every Indian is needed. The Gram Panchayats & municipality should be made accountable for such activities. It's a shame that we are not able to provide the sanitation facilities to 70% of our
population. My head goes down in shame when I get asked such questions from foreigners.

7) The wrong treatment of foreign tourists in India. The way beggers and shopkeepers harass the foreigners in India is beyond comprehension. We need to raise public awareness regarding this issue as tourism can be such a big industry in India, if we can work on some issues like this and improve them.

8) Promoting Inter-religious faith & harmony- without name calling for any particular group or individual. You can also cover increasing religious intolerance in some people which is making them terrorists. Just promoting this can give great strength to cause of nation building.

9) Improving quality of education in govt schools so that govt school kids can compete with kids from private schools.

10) Dowry related deaths & harassment- both from males & females. I know females are the major sufferers but some females are using it as tool to harass the groom side too.

12) Increasing number of rapes and unsafe working and living environment for women in india. What could be the punishment for such crimes?

13) The breaking of joint family system and its repercussions.

14) How to improve our roads & public transportation system so that they can become helpful for disable people. I know it's not even good for able people but still we need to think about it.

15) Story about people who fought it against all odds and are now the leading and guiding light in their area of influence.

There are many more issues which can be raised. I hope to live in developed India in my lifetime and I can now see it becoming a possibility as youth like me won't let this status quo prevail for long. Satyamev Jayate would be real eye opener for those sleeping in deep slumber. Aamir has chosen superb timing for this show. The vegetables are already purchased & cut by Anna & baba Ramdev and they have collected all the ingredients for cooking a good mix vegetable dish. They have even put the oil in frying pan and now Aamir is here to give strong tadka. I hope that the mix veg thats being cooked will act as hunger satisfying meal for lot many patriotic Indians like me. Aamir is a perfectionist. He understands the mood of the nation. There are many more who are doing lots of work in this area. Narendra Modiji is one of the very few leaders in India who have taken this responsibility on their shoulders from a long time. His "Beti Bachao Andolan" & "Kanya Kelavani Yojna" are pioneering efforts in this direction. Even Madhya Pradesh Chief Minister's "Ladli Lakshmi Yojana" is also a commendable effort for this cause.

I would love to see few individuals & organization making common ground & agenda for natiolistic cause. Organizations like RSS & individuals like Baba Ramdev, Narendra Modi, Aamir, Subramanian Swamy, Arvind Kejriwal & General VK singh should come together and develop a common agenda for development of this great nation. If this happens, the day is not far when we all will be living in developed India. I thank the people involved for the wonderful show for promoting the nation building activities. Vande Mataram - these words itself say we worship our mother. I hope that India will realize the ancient thoughts of rishis and give respect to our mother, sisters, daughters & wives as it was intended by our forefathers.