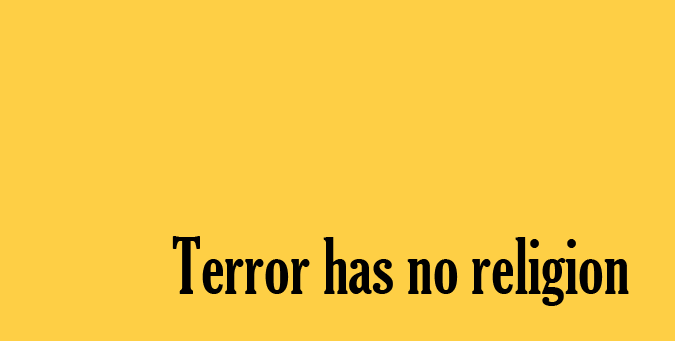 Terror has no religion. If you are going to stop reading this article any further, then there can be no bigger testimony that how badly this phrase has been abused by a certain sect of the khadi-clad brigade. Though the merits of the phrase are indisputable & unquestionable, and a sect of that brigade uses it in all sincereity propagating its message in all honesty, there are some who use it as a refuge (Just like they use secularism after pitting one against the other) after using it for petty political gains & for pleasing their High Command’s. It becomes even worse when the sufferer is an entire country, its glorious past & its citizens who are spread all across the globe. The damage therefor it brings is irrepairable.

At the Congress Chintan Shivir, the scion prince after a 9 year long wait finally announced that he has arrived. But soon after he left the podium, the succeeding speakers didnt seem to show faith in their own leader’s assurance & the future roadmap he laid. Hence, one of them raised the old rhetoric of “Hindu Terror”. Prior to this, even in past this bogey has been raised to score political points. A particular community is forced to believe that if you vote any right-wing party, then your existence will be in danger, your sons & daughters will not return home in evening. The sword of Hindu Terror will wipe you off forever if you vote them to power. To propagate this theory of hatred, the “Hindu Terror” phrase is extensively quoted (even in events which are not even remotely connected to it. For eg: The Congress Chintan Shivir). The idea behind it is simple: Repeat a lie 100 times & voila, it becomes truth. Unfortunately (for them), the august-honourable courts of this country & the law of this land doesn’t seem to believe in their bunkum. Hence, despite NIA working on 10 such suspects (allegedly, from Hindu Terror brigade) for almost a decade, the court has not found a single one of them guilty. There has not been a single conviction till date which can substantiate that theory. Instead, cases such as the Samjhauta blasts, which is everytime raised to propell that bunkum theory has no takers except the spokespersons of a political party & the NIA. The US (CIA), The UN, convicted terrorist David Headley & his wife, have all pointed fingers at Pakistan & their “non-state actors” (as Pakistan fondly calls them). Even Pakistan’s Interior Minister Rehman Malik had said that Pakistani terrorists were involved in the blasts. When the entire international community, convicted terrorists,  have all accepted the role of Pakistan based terror outfits for the blasts, then why are we hell bent in twisting the facts? When our own courts have not convicted a single one out of them till date despite a decade long investigation, why is a political party constantly raising such a weak-bogus rhetoric? One such accused is a lady & she has been subjected to 4 narco-analysis tests. It has deteiroated her health to such an extent that some reports suggest, it has rendered her paralytic. Despite such rigorous & extensive investigation, why no outcome? Not a single of those narco-analysis test reports been presented? What is there to hide when every leader of the ruling coalition is dead sure of Hindu-Terror & they keep raising it whenever the govt is in desperate need of an issue to cover its inefficiency? It is left to the reader to jump to his own conclusions.

Amidst this back-drop, let us now analyze the recent hangings of Kasab & Afzal & the several contradictions & political implications which this govt will have to face over it:

1) Firstly, after the immense hue-n-cry over Hindu Terror, the govt. hanged two terrorists (one of them being an Indian citizen) & both turned out to be non-Hindus. This in itself punctures the govt.’s claims. In coming days, this is soon going to boomerang on the govt/parties who till a fortnight ago were shouting “Hindu-Terror”. And if Wikileaks is to be believed, a certain youth icon who is best known for his game-changer theories, is said to have told the US ambassador that the biggest threat to this nation comes not from across the border but from the home grown Hindu-terrorists. However, as always, his theory has proved to be wrong. The only humiliating bit which the leader might be feeling this time is that, the humiliation has been caused by his own govt & it’s Home Minister.

2) Were the citizens of this country been fooled all this while? So far the excuse given for not hanging them was that their turn is far behind in the queue and hence their turn shall come & it’ll take it’s own sweet time. That theory has been proved to be false & the leaders who propagated it stand exposed by their very own govt’s actions. The reader is clever enough to decide why this was done.

3) If Hindu Terror was the such an “epidemic”, then why before the commencement of parliament session are these hangings taking place? Before winter session, Kasab & before an important budget session, Afzal? Isn’t politics being played in a penultimate election year for votes? Isn’t the timing suspect? Why this sudden hurry? Again the reader must derive his own conclusion out of it but, I feel (& I may be wrong) that after a dismal performance, the govt wants to position itself as a doer & to remain fresh in the minds of the electorate, these vital steps are being taken in the final year.

However, the electorate’s decision, as to which party he must vote for the next time, is made when he is refilling petrol, paying for an LPG cylinder, buying groceries & fruits etc etc etc. These knew-jerk decisions are too little, too late.

4) How is a section of minority going to react to all this? There is already tension in the Indian state of J&K. The minority happens to be their core vote bank & going by their outburst, there’s no reason not to believe that they will definitely demonstrate their angst during the next elections. A recent report of the Rajasthan state intelligence shows that the incumbent Congress govt may be wiped off in the next assembly elections. It becomes all the more important because Rajasthan happens to be one of the nine states which are going to go to polls just before the general elections. If theHindi daily Jagran is to be believed, it has stated that the state’s own report pegs pegs the BJP at around 110-115 seats in a 200 seat assembly. The main reason for this is the dislillusioned Muslim vote bank. They feel more safe during BJP rule is what the report states. Recent actions by the center therefore cannot be seen in isolation.

5) Lastly, is there a hidden hand behind all this? After all, all this cannot take place without the President’s accent. But was Pranab Mukherjee ever the Congress’ first choice for the President’s post? He was the consensus candidate which the party had to put up after the Mamata-Mulayam press conference. The UPA got it’s act together only after that. But it still doesn’t change the fact and sad it is, that despite having an illustrious track record & seniority, Pranab was never their first choice. When everything in politics is driven by motives, why shouldn’t the reader question this as well?

The Congress seems to be taking decisions in haste to nullify any attempt by the BJP to corner them in the coming year & more importantly, when parties get into the election campaigning mode. But, it appears that they are doing more damage to themselves than to anyone else. The party manager’s have lost the plot. The Congress isn’t working on its strength, but on the agenda set & raised by the BJP. The joke doing the rounds these days is: Board a flight to Ayodhya... After Kasab & Afzal Guru, rumors are that UPA has started construction of Ram Temple.