What's wrong in calling yourself a Hindu Nationalist? 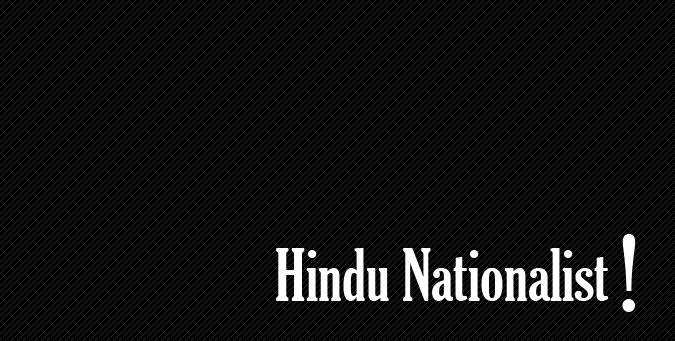 The moment we say 'one' then we cannot deny the existence of either 'zero' or 'two' or a 'hundred'. So why the big ruckus over Narendra Modi (NaMo) declaring himself a Hindu Nationalist. It only strengthens the fact of the existence of an Islamic Nationalist or Christian Nationalist or a Malayalee Nationalist too. And he absolutely did not deny anyone the right to claim accordingly. In fact in one stroke NaMo has given people freedom while exercising his very own. Did I hear someone say it’s a great Prime Ministerial quality?

Then why are people simply rushing to accuse Narendra Modi and condemn him especially in the glitzy hi-tech studios of tv channels. And some supposedly suave tv hosts crying hoarse 24x7 to stop the buck at NaMo !

Well, even the print media did have their take on NaMo with the usual screaming sirens of sensational editorials like Shobha De who had a Shabash (meaning 'excellent' in Hindi) Day busy with some Modi-bashing. Otherwise how would one make it to those Page 3 whine - n - dine weekend parties?

By the way don't we have a friend who is a Shabana Azmi, Michael Sundaram, Rauf Krishna, John Lobo Prabhu or a Jyoti Fernando? Perhaps there's a lil bit of Hindu in every Nationalist. Just as there is a lil bit of Sanskrit in every language. It just maybe that some were not intelligent enough to go much deeper and inquire into the religion they were born into or simply fell for some freebies to shift 'allegiance' to another. Or maybe with their conversion they simply declared their ancestors or parents unintelligent to be born into and practice the tenets of a religion they may have been following for several centuries. Or they simply exercised their right to choice.

Whatever the circumstances one's nationalism or patriotism need not be called in to question. Subject to not being caught in an anti-national act which applies to anyone anyways. So when NaMo declares his Hindu Nationalism its either redundant or inspires one to say that an Islamic or Christian Nationalist is just standing by his side. Shoulder to shoulder. Or it simply tickles the Modi-bashers time and again to tweet and shout. 'Cos the TV studios do not allow you to twist and shout.

To close the argument on the Hindu Nationalist debate or rather 'event' has kicked up a storm so that every Tom, Dick and Harry Nationalist must step out to vote for their respective political party's. So be it. The election epidemic is out now and no doctor can treat it. But at least it should be a definitive and decisive vote for change in 2014. Because our Hindu, Muslim, Sikh and Christian Nationalists need not change. It is our freedom to claim so. And Narendra Modi stood up to only reinforce and remind us of our freedom. Both individual and collective.

Author : Vidyut Udiaver
The opinions expressed in this article are purely the writers' own and do not reflect those of any organization or individual. And like everything else in creation they are also subject to change!