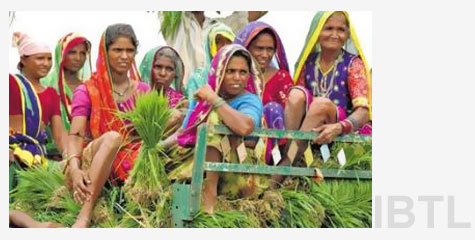 Paddy farming is the major source of livelihood for tribal farmers and it is their staple food also. Because of traditional methods employed for paddy farming, these tribal farmers always used to bear loss. To impart information regarding new techniques in paddy farming, Janaseva Foundation vowed to provide them a four-fold training. Farmers who opted for four-fold method had an exponential rise in their paddy yield. The method yielded marvellous results everywhere. Till date, the foundation has trained over 5000 tribal farmers in this four-fold technique.

Janseva Foundation chose Maharashtra and Gujarat as its work area. Along with seven districts of Maharashtra and four districts of Gujarat, the tribal farmers from Dadra and Nagar Haveli were chosen for training. Eight agricultural scientists along with karyakartas laid the foundation for this project. Among them, Dr Y Daftardar started working as a full time karyakarta. Dr N K Sawant, founder of the four-fold method also used to accompany the farmers during training.

1)Utilizing the filth obtained in paddy production as manure (Silica is obtained from the ash).

2)Planting glyricidia around dams and using its leaves as manure.

3)Planting saplings at some specific distance from each other.

4)Dumping urea-DAP tablets to a greater depth in the field.

The foundation kept in constant touch with Maharashtra Government. The government also realized the importance of this method. Government made the propagation of this four-fold method as its own programme and implemented it in all the paddy growing districts of Maharashtra. Thus the technique reached up to the lakhs of tribals as well as villagers. Bricket machines were given to a lot of self-help groups along with subsidy. Through Janaseva Foundation, the technique reached up to 5000 villagers and with the government’s scheme, the circumference of propagation still widened.