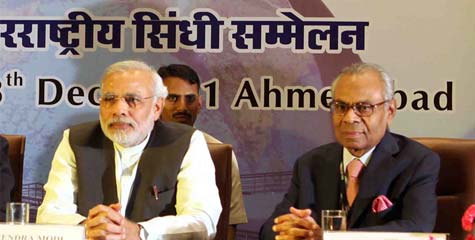 Ahmedabad, 16 Dec 2011 | Gujarat Chief Minister Narendra Modi today urged the Union Government to check the water flowing down the dam across Indus River in Pakistan to Rann of Kutch and divert the same surplus water into the landmass in the semi-arid Kutch region.

Inaugurating a three-day international Sindhi conference in Ahmedabad, he said that at present the subsurface water from the river go waste into the sea. It is also an occasion to revive the extinct Saraswati River which used to flow through Gujarat 400 years ago.

The Chief Minister said that 5,000-year-old Indus Valley Civilization remains show the how developed it was in town planning, culture, vast playgrounds and merchandise. He said that excavations at Lothal showed that the period was rich in maritime trade too.

Paying his tributes to the people responsible for a flourishing civilization five thousands ago, Mr. Modi fervently called upon particularly the new generation to keep alive the civilization. There is no place for complacency. A nation which neglects its history cannot build a new nation.

The Chief Minister recalled his old association with Sindhi families as he praised the Sindhi community for maintaining their culture, family bond, mother tongue, dress and food habits. He had a word of praise for the Sindhi food festival on the occasion.

Sindhi Council of India President Amar Doltani welcomed the guests and spoke on the rich Sindhi culture. Noted industrialist Shrichand Hinduja delivered the keynote address on the enterprising spirit, business acumen and the capacity to work hard of the Sindhi people.