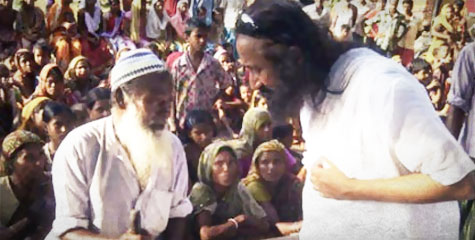 The mass exodus of thousands of north-eastern people from various parts of India, coming on the heels of Assam riots and consequent displacement of hundreds of thousands of families, is a huge blot on India.

It is time to rally around our North Eastern brethren and open up our hearts and homes to assure them that they have a million homes in India. They are not alone and don’t have to flee.

This was the message taken by Art of Living teachers Sanjay Babu, Neelam Kochchar, Deepa Dave and their team of volunteers to the thousands of panic- stricken North Eastern people at Bangalore Raliway station ready to leave in the next train to in North East.

Sanjay Babu explained, “There were many distributing food and water at the railway station to the insecure north eastern crowd. But none could assure security to them. We were sent by Gurudev Sri Sri Ravi Shankar Ji to assure them that they are safe and there was no need to panic and flee from Bangalore.”

The Art of Living teachers reached out to thousands of fearful north eastern workers and students of Bangalore and dissuaded many to stay back. Those who were fearful of going back to their residences in Bangalore were offered a home in the Art of Living Ashram. Around 200 north eastern people are now safely living in the Ashram premises till they feel safe to go back to their homes. In fact, thanks to the feeling of security given to them by Gurudev, many of them are already feeling confident of returning to their jobs in Bangalore.

Over 33,0000 people are reported to have left Bangalore because of direct and indirect threats to leave the city before August 20. Many also left because they were being called back by family members in Assam so that they could, “protect their house together or die together!”

Gurudev Sri Sri Ravi Shankar has encouraged the north eastern students in Bangalore to continue their studies. If they need help, Sri Sri University would come forward to enable their education. The workers have been assured that Art of Living would help them find jobs. Gurudev Sri Sri Ravi Shankar, has been engaging the people of North East since many years through personal interactions and many service initiatives. 121 children from Nagaland, Meghalaya and Assam are staying & getting education at Art of Living Ashram since six years.

Only a genuine peace maker like Sri Sri can remove the mistrust and fear that has engulfed Assam in recent times.

During his recent visit to Assam (watch video) in the aftermath of ethnic clashes, Sri Sri was heard with eager anticipation by the people from the both sides of the divide.He effortlessly got the Bodos and Muslims to see reason and talk in conciliatory tones thus sowing the seed for reconciliation. But the question remains whether the rulers of the day will be interested in watering the seed?