Arrangement of Deities In Temple Room and Queries about Aarti 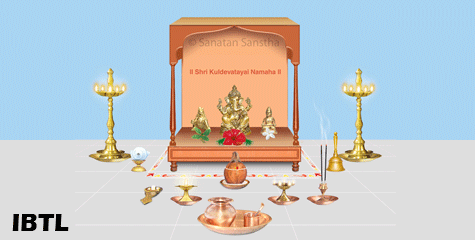 Most Hindu households  have a designated Temple Room or Devhara or Dev Ghar, Puja Ghar, or similar. In cities where small-sized apartments are a  norm, a separate room for designating  Deities is virtually impossible. Deities are installed in a corner or shelf in  one of the  rooms. More often the puja altar is in the kitchen as women of the household are more devout than men. Some families arrange a loft on a section of a wall. In such a small place crowds of Idols or Images of various Deities are cramped together. In this article, we have narrated the number of Idols or Images of specific Deities and their arrangement based on spiritual science, so that worshippers can accumulate maximum benefit of Sattvikta.

Temple altar in a home: The deities in the temple altar at home should be arranged in the following manner: Lord Ganapati placed in the centre with the male family deity/Kuldevta and other male deities, e.g. Hanuman, Balkrushna, to His right. Ideally, the female family deity and other female deities, e.g. Annapurna, are placed to His left. In some pictures, the female deity is depicted along with the male deity, e.g. Sitaram, Lakshminarayan, etc. Whenever She is depicted to the left of the male deity, She bestows blessings onto devotees along with Her master.

To conclude, when the female deity is to the right of the male deity, She possesses more energy and should be considered as the principal deity. Hence such a picture is placed to the left of Lord Ganapati. One should keep the picture of the saviour or the destroyer form of the deity for worship as per one’s wish to undertake spiritual practice of that form. If a person having a Guru resides alone then he should keep only his Guru’s photograph in the temple. If there are other family members, then the Guru’s photograph should be placed to the right of Lord Ganapati, followed by the male family deity’s photograph. Photographs or idols of the female family deity or other female deities should be placed to the left of Ganapati.

How should the Temple room be planned?

Direction: The Temple room or altar should face either east or west, eastern direction being ideal. The vibrations emitting from Deities gain momentum on the strength of action energy existing from the eastern direction and benefits the worshipper.

Materials: The temple should be made from sandal or teak wood. It may not always be possible or convenient to use sandal wood. Then teak wood is ideal and has more potential to imbibe and emit Sattvik vibrations.

Colours: The colours of the temple should be faint brown, matching natural wood. This colour is in coordination with the worshippers’ journey towards Final Liberation.

Shape and size: The size of the temple should be Length X Breadth X Height in the proportion of ‘2 X 1 X 4’. The temple should have an arch or dome-shaped ceiling. Similar design can be seen in any entrance door of a temple.

The utensils used in a home Temple: The utensils for worship like plate, Kalash, etc. should be made of copper. This metal has the capacity to imbibe upto 30% of Sattvikta of Deities. The other utensils like lamp (Niranjan), bell (Ghanta) can be made of brass. A coconut should be placed on the Kalash and a coin and a betelnut  placed inside the Kalash. If possible a conch should also be placed in the Temple. The conch, Kalash and bell should be worshipped along with Deities.

Lamp: Ideally, the lamp in the Temple is lit with Ghee, not oil.

Puja (Worship) ritual: If one is not performing any ritualistic worship (puja) presently, then here is the ideal step-by-step method:

• Everyday the deities and the temple should be wiped with a cloth. Two incense sticks should be lit in the morning and in the evening.

• After removing the previous day’s withered flowers and leaves (nirmalya), the Deities should be wiped with a cloth. After offering fresh flowers, incense sticks should be lit and waved in a clockwise motion. Then, two wicks should be rolled into one and placed in a lamp containing clarified butter (Ghee). The lit lamp should then be moved in a circular clockwise motion (Arti).

• The idols should be bathed and wiped dry.  The photographs are wiped first with a wet and then with a dry cloth. Then sandalwood paste (Gandha) should be applied to the deities and unbroken consecrated rice grains (Akshata), flowers, turmeric (Haladi) and vermillion (Kumkum) should be offered. After that a burning incense stick is placed at the altar, followed by  moving a lit lamp in a clockwise motion (Arti). Finally, an offering of food (Naivedya) is made and one should pray for success in one’s spiritual practice.

Some suggestions to keep the Temple room neat and tidy:

• If you have not yet received the Grace of Guru, you must keep the Idol or Image of the Deity of your family (Kuldevata/Kuldev) in the temple altar. It is recommended that a worshipper visit the temple of the Kuldevata/Kuldev as many times as possible or at least once a year.

• For an in-depth study of the procedures to worship Deities in Panchopchar (Five Steps) and Shodshopchar (Sixteen Steps), interested worshippers may contact us.

Related links :
# Correct method and science of doing Namaskar to God
# Why namaskar, not hand shake: Spiritual benefits of namaskaar
# Arrangement of Deities In Temple Room and Queries about Aarti
# How to make Pujaa platter arrangement: Cosmic elements