Sri Lanka Buddhist monks destroy Muslim shrine, alleged that local Muslims were trying to convert the shrine into a mosque 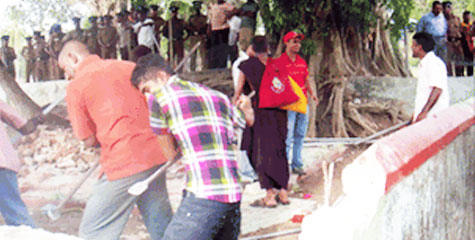 A group of Buddhist monks in Sri Lanka led a crowd that demolished a Muslim shrine last week, the BBC has learned.

The monk who led the group told the BBC he did it because the shrine was on land that was given to Sinhalese Buddhists 2,000 years ago.

But a prominent Muslim in the area said he was very sad and the sentiment was shared by many Sinhalese too.

A Sri Lankan news website showed photographs of a crowd including monks apparently reducing a small structure to a pile of rubble.

The mob waved Buddhist flags and - in one picture - burnt a green Muslim flag. There have been no other reports of what happened.

'Police presence'
But the BBC has spoken to the monk, Amatha Dhamma Thero, who admits masterminding the demolition of the Muslim shrine.

He said he arranged a gathering of 100 or so monks, including some from other Asian countries, to take action because - he alleged - local Muslims were trying to convert the shrine into a mosque despite new constructions being illegal on this site with its many Buddhist temples.

He said local government officials arrived and said they would remove the shrine within three days, but the crowd said "we cannot wait" and proceeded to tear down the structure.

But the police deny they were present at all.

"This is a fabricated story. No media in Sri Lanka has reported this and we don't have any police report. If this happened there would have been a complaint. We have not received any complaint," outgoing police spokesman Prishantha Jayakody told BBC Sinhala.

One councillor told the BBC that mosque officials were afraid to complain about an attack that occurred while senior police officers were present.

The demolition has been denounced by a local senior Muslim and a local Sinhalese politician.

'Government should act'
The Muslim, Abdul Razack, denied that a mosque was planned and said the demolished shrine was about 300 years old and had attracted visitors of other faiths too.

He said local Muslims and Buddhists alike were concerned at what happened but Muslims had avoided the site on Saturday, fearing sectarian disharmony.

The politician, Aruna Dissanayake, said the government should act against those who had attacked the shrine.

A minority was trying to create sectarian problems in a place where most Muslims and Sinhalese Buddhists co-existed well, he added.

Most of Sri Lanka's majority Sinhalese are Buddhist, and Muslims are regarded as a separate ethnic group.

In a recent newspaper column, a veteran Muslim journalist said there was a growing fear among his community that some people were running a campaign to incite the Sinhalese against them, including through Sinhalese websites and print media.