For Him, the Yazidis are family 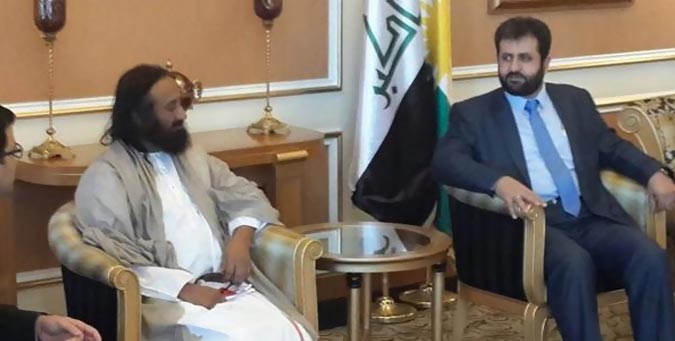 "I would invite all good-hearted and good-minded people on the planet, especially from the Islamic world who know that these people are doing wrong. Put sense in the hearts and minds of these people. The scholars should stand up and say that their interpretation of the holy scripture is absolutely wrong. They must bring this clear message to the people. Perhaps that can help in some way."

Sri Sri is such a humanitarian and spiritual leader who has a vast repertoire of dealing with communities and conflicts - whether individual, social or national. He has his pulse on human nature and its frailties and understands the fanaticism of religious groups. Hence this statement from him is significant and potentially points to the direction of a solution.

The ball now lies in the court of the Islamic leaders to guide the ISIS who commit heinous inhuman acts. Entire humanity has pronounced them wrong. But what is needed is a voice of strength which openly and fearlessly stands up for the persecuted Yazidis. Sri Sri has done that. Till now no Islamic leader has spoken up. And the ISIS needs that. They alone can knock sense into these barbarians out to senselessly enslave, mass murder, gang rape, convert.

A few countries sent aid - US, UK, France, Hungary, Poland, Australia - as is politically correct. But a leader is yet to find it in him to go beyond his brief, to feel for those that do not belong to his religion, country, race; to do what is required at a humanitarian level whether politically correct or not. No leader felt the pain of the Yazidis enough to talk for them, to visit the country where the dreaded ISIS continue their atrocities. Sri Sri Ravi Shankar is that lone leader who followed his heart, spoke for the Yazidis and is going to Iraq for the Yazidis from Nov 19-20.

It will be the beginning of the change just as it had been when he once visited the traumatised nation of Sri Lanka where thousands of Tamilians were being massacred. It is said the vibrations of Lord Mahavir caused even the thorns to withdraw into the stem of the flower. Such is the power of a true spiritual leader.

Here is someone, who connects and reaches out to those in pain, willing to do just about anything to ease their pain, making himself available in every possible way. Several times in the past he has done that. But even in this extraordinary situation, he has not thought twice.

Surprisingly or not, a delegation of Yazidis approached Sri Sri to help them, not a political leader or any other religious leader. Sri Sri is born Hindu and an Indian. But he is not bound with these identities. Here is a leader who inspires faith across all definitions of religion or country or race because he believes and lives his dream of One World Family. Vasudhaiva Kutumbhakam. For him, the Yazidis are family.