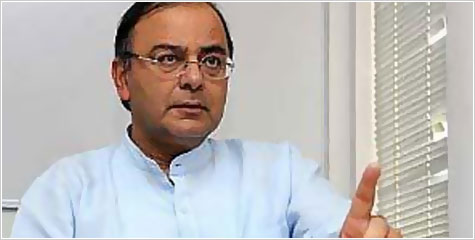 Shri Arun Jaitley, the Leader of Opposition in the Rajya Sabha is a highly respected political functionary. As a lawyer, orator, Parliamentarian and sincere crusader for civil rights he has carved out a niche for himself. His views are taken seriously, and he has a special knack to find solutions to ticklish problems. A person with deep roots in the organisation he made a debut in politics through ABVP and was elected President of DUSU in 1975. A veteran of many a political, electoral and legal battles, he is a great speaker with debating skills. Earlier, he was BJP national general secretary and party spokesperson. He served as Law Minister in Shri Atal Bihari Vajpayee’s NDA government. Amba Charan Vashishth spoke to him on many national issues recently. Excerpts:

You have completed two years as Leader of Opposition in Rajya Sabha. How satisfied are you with the performance of the party in the House?

Personally, I am quite satisfied. But it is for others to observe. I am happy to say that almost every MP of my party has made a contribution by participating in the discussions and raising the issues of vital public importance. The overall performance of the entire Opposition in the Rajya Sabha has been commendable.

On August 27 both the Houses of Parliament unanimously adopted a resolution on Lokpal. Do you think it paved the way for a smooth passage of a strong Lokpal Bill in the Parliament?

The Parliament did adopt a resolution and it should pave the way for an effective Lokpal. It is for the UPA to come out with its draft with the recommendations of the Standing Committee. Congress somehow or the other appears to be trying to wriggle out of its commitment for a strong Lokpal. Much will depend on the type of the Bill the government comes out with before the House.

Congress is trying to belittle Anna Hazare’s crusade against corruption by imputing BJP and RSS hand behind the movement. How do you view the situation?

BJP or RSS are only supporting the spirit of the movement against corruption. The movement is purely a Civil Society’s movement and it is led by Shri Hazare. It will be   improper for the Congress to allege that it is controlled by BJP or RSS.

In the 2008 cash-for-vote scam, doesn’t it look that the investigating agency has turned the tables on BJP whose MPs and Shri Sudheendra Kulkarni were the whistleblowers?

The investigation in the cash-for-vote scam is completely faulty. The MPs and Shri Kulkarni were whistleblowers. Once the investigation has established that bribes were indeed paid and no case has been primarily made out, it is incorrect then to involve whistle-blowers in a conspiracy to pay bribes. The intention of the whistleblowers was to expose the bribery and not to participate in it.

The last winter session of Parliament as a whole got washed out because of the intransigence of UPA to meet the Opposition demand for a JPC on 2G spectrum issue. Occasions of stand-off between government and the Opposition in Parliament on various issues have become too frequent. What should, in your view, be done to ensure that such instances do not get repeated in future?

The history has vindicated the Opposition. The winter session of 2010 was washed off because of serious allegations and demand for constitution of a JPC. All the disclosures that have come after 2010 have clearly established that there were cases of criminal misconduct for which chargesheets have been filed and several people are in jail. Had it not been the Opposition pressure during that session, none of this would have happened.

The PAC and the JPC were the fora which had hitherto functioned in a non-political fashion concentrating on merits and national interest involved in each case. But now it appears this spirit has started evaporating. If political and electoral considerations overweigh with the MPs overlooking merit and national interest involved, is this situation not detrimental to the strengthening of parliamentary democracy?

I think the distinction in the functioning of PAC and JPC is getting obliterated because the Congress wants to obstruct the proceedings of the two Committees. It does not want the two committees to give an objective finding, but do a cover-up.

There has been lot of talk, particularly by the Prime Minister complaining of judicial “overreach”. How do you see the present situation in which judiciary has had to intervene in a number of matters where otherwise the executive should have acted on its own?

Judicial overreach should be avoided. Judicial activism and judicial restraint are two sides of the same coin. Activism can extend only to directing Executive to perform its functions. It does not extend to the Judiciary usurping the functions of Executive to itself.

How satisfied are you with whatever steps the UPA government has taken to bring back the black money stashed away in foreign banks?

I am not at all satisfied with the steps taken by the UPA government to bring back the financial assets stashed away by Indians in foreign banks and to monitor progress. In fact, government has not taken proactive steps which several other developed countries have taken.

In a number of scandals, like the JMM bribery case, the so far not coded parliamentary privileges seem to have come in the way of dispensing justice to the wrongdoers. Parliament cannot be allowed to be turned into a den of corruption and crime behind the curtain of these privileges. How should such a situation be remedied?

A new phenomenon has emerged under UPA where if a person hurls accusations of corruption against Congress ministers and leaders, the party instead of trying to prove their own innocence, hits back by trying to paint the accusers more corrupt than the person accused. How do you react at this phenomenon?

Two wrongs do not make one right. Merely making counter-allegations does not make you clean. We should be able to root out corruption wherever it is found irrespective of the party where it is found.

Union Law Minister Salman Khurshid has challenged BJP to block the passing of the Prevention of Communal Violence Bill if it can. What do you say?

I don’t think any Chief Minister or any sensible person with some political vision is willing to support this Bill. It is going to demolish the very federal structure of the Constitution. It is highly discriminatory. It depends upon the birthmark of the offender whether any offence is made out or not.

In democracies like USA and UK, law makers act according to their conscience to safeguard the interests of the nation on national issues, like fight against terrorism, corruption and black money. They do not look up to their political bosses for a nod how to act or what to speak on such a national issue. Why is it not so in India?

UK particularly has had a political switchover when there were defections in their system but it has never affected the morality of British politics. In India defections did impact the morality of politics and therefore it was felt necessary to ban defections and a defection law had to be formulated to ensure that whips are not defied in the House.

Prime Minister Dr Manmohan Singh was so far viewed as a ‘clean’ person. With the bursting out of 2G spectrum scam and fingers being raised on Home Minister P Chidambaram and A Raja trying to claim that everything was done with PM’s knowledge, has the situation not affected PM’s image any way?

The Prime Minister is a weak leader. He has been making compromises in order to continue in power.  The effect of this has been that even though he personally claims to be clean, yet he heads one of the most dishonest governments in history.

If P Chidambaram has to resign under Supreme Court pressure, do you think the Manmohan government will totter and elections to five State Assemblies could also see mid-term poll for Lok Sabha?

I do not know what Supreme Court would say in the case of Shri Chidamabaram. But prima facie it appears that he had agreed with Raja’s proposal about the allotment of spectrum in 2008 and 2010.

What, in your view, would be the outcome in the mid-term poll in Lok Sabha?

I think if elections are held today, the Congress will be on the back foot. It is on the defensive. Its image has been badly tarnished. There is a serious crisis of credibility and a crisis of leadership in the UPA.

With reports of UPA graph considerably down and that of BJP-led NDA going up, the media has started speculating about NDA’s prime ministerial candidate. Have you anything to say?

Obviously we are living in a two alliance system. If the UPA goes down the NDA benefits. As it is, the activities of the BJP have substantially improved and the atmosphere in the party is much better. Therefore, people are speculating about what would happen if the NDA comes to power. But it is too early to speak who the prime ministerial candidate would be. We shall decide at the appropriate time and decide in a proper democratic process.