Sonia Gandhi - 'Holy' only in Indian media, not so abroad? : IBTL 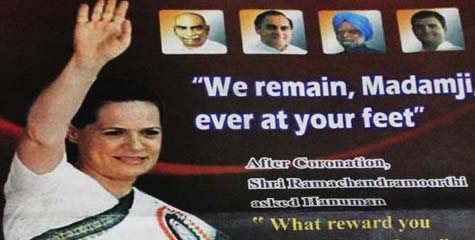 A neutral observer of Indian media could soon catch up the partisan attitude that our media takes while extending the 'holy cow' treatment to the Nehru-Gandhi dynasty. Despite an appeal at the Supreme Court and question having been raised in Rajya Sabha on Rajiv Gandhi's Swiss account, Indian media is tight-lipped on the issue. Of course, it's the same media that made a storm of corruption cases of other political leaders across party lines, but when it's about the top family, media is muted. Certain BJP supporters even complain the mainstream media to have become Congress mouthpiece which is substantiated by the differential treatment meted out to Yeddyurappa of BJP and other former CMs of Karnataka, while their offence was the same. But, let's not accuse our not-so-sacred journalist fraternity of being partisan between parties, however, the silence of Indian media on issues relating to Sonia Gandhi is in contrast to how the foreign media reacted to it, and quite early.

The Huffingston post, a leading US daily, published an analysis of corruption charges against Sonia Gandhi as early as in April 2011. It titled its piece as "World's #9 Most Powerful Person Now Accused of Corruption -- Will She Fall?" The analysis raises interesting points, which our media is too shy to raise, even now, when there's a public upsurge against corruption, for reasons, best known to it.

Excerpts from the article are given below, for our readers.

Sonia Gandhi has one of the most remarkable life stories in international politics. Born Edvige Antonia Albina Maino into a family of modest means in rural Italy, she didn't even get a chance to complete high school before heading to the UK for work. There she met Rajiv Gandhi, son of Indian Prime Minister Indira Gandhi. She eventually married him and the young family moved in to Indira Gandhi's New Delhi's home, putting her literally in the heart of Indian politics. However there have been growing, persistent murmurs about questionable business deals and inexplicable exponential jumps in the personal wealth of her and her family.

In 1995 when M. D. Nalapat, then Resident Editor (Delhi) of the world's largest English language newspaper, the Times of India, began a groundbreaking series of articles about Sonia. The series said that her desire for power wasn't simply altruistic and that the wealth not only of her, but of her Italian relatives, rose stratospherically after Rajiv Gandhi became Prime Minister in 1984. While the facts in the article were never refuted, Nalapat was forced out of journalism in 1998.

Part of the genius of Sonia Gandhi is her ability to present herself as a helpless victim, convincing even her political rivals not to fear her as she is fatally flawed. In 1998, India was being led by BJP Prime Minister Vajpayee. When Nalapat spoke with him about Sonia, he was bluntly told to lay off, as, "so long as a white Christian lady is head of the Congress Party, I [Vajpayee] and my party will always be in power". Vajpayee and his party lost power to Sonia's Congress in 2004.

Read the full article on Huffingston post here - World's #9 Most Powerful Person Now Accused of Corruption -- Will She Fall?