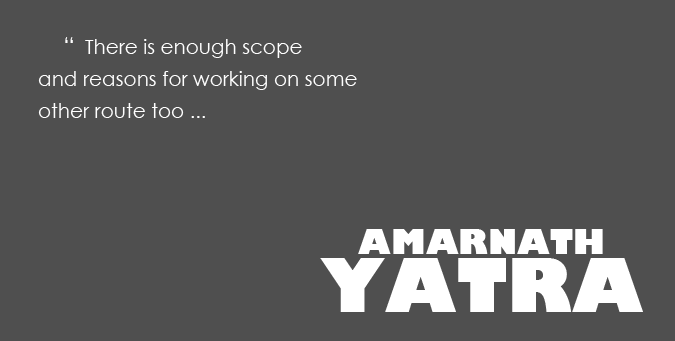 Supreme Court, taking cognizance of the large number of deaths of pilgrims while on Shri Amarnath Yatra, issued directions to Shri Amarnath Shrine Board (SASB) to propose/disclose action plan for the better management and safety of Yatra during 2013 and thereafter. Many in the Kashmir valley reacted in parochial and intolerant manner on the issue. Dr. CM Seth, an Environmentalist and Field Biologist has expressed his views on the much needed infrastructural augmentation and its impact on the local environment.

01. The Holy Cave : Holy Amarnathjee Cave in deep Himalayas in Kashmir region of the State of Jammu & Kashmir is one of the holiest destinations of Pilgrimage for Hindus all over the world. All pray Almighty for an opportunity, weather permitting, to pay obeisance at holy cave. No doubt some do consider it more auspicious to visit the Shrine for the Darshan of Ice Lingam. The number has gone nearly 700,000 in 2012 even with the Yatra period restricted to around the Rakshabandan (Sharavan Poornima). Formation of Ice Lingam every year during the winter and thereafter its melting through Rakshabandan day (in 2012 it stayed even a few days after that) is a nature's wonder. And to Hindu its Bhagwan Shiva's blessing. It is Nature's unique creation (since times immemorial) every year that attracts more and more devotees to the Cave Shrine particularly during the Rakshavandan days (like more Yatries visit Vaishno Devi Shrine during Navratras).

02. Yatra routes. : From time to time different routes were adopted by the Yatris to visit the shrine as per the requirement, circumstances and convenience of Yatris. Historically devotees used to visit the holy cave from Pahalgam route upto Panjtarni, climb up the hill opposite to Amarnath cave and then descend down to have the darshan of Ice Lingam. From Panjtarni to Sangam and then to Holy cave stretch was developed much later. There was another route also from Chandanbari to Sangam and then to holy cave. From Pahalgam to Holy Cave the distance is about 45 kms ascending gradually 13500 feet near the holy cave.

Presently Yatris cover this distance in three to four stages ie. Nunwan, Chandanwari, Pisso top, Seshnag, Panjtarni and Holy cave. This route gives enough opportunity for acclimatization and rest also. The other route is Baltal route that has become more popular recently because of the return from cave being possible in single day. Distance from Baltal (9000 ft MSL) to Holy cave (13500 Ft) is 12 kms.

There is enough scope and reasons for working on some other route too for the sake of convenience and smooth run of the yatra.
03. Carrying Capacity of tracks: Going by the simple convenience and comfort standards the present safe ( still with a number of life risking sections ) carrying capacity of each track is not more than three to five thousand per day i.e for both tracks it is about six to ten thousand a day. But it is the Astha of the pilgrims that the comforts do not matter for them and they tread the tracks taking all discomfort and risks happily. With the numbers further increasing (more so when the SASB is firm on limiting the Yatra period) and with the present condition/level/standards of tracks and boarding facilities continuing, the causalities due to physical stresses and isolated retrieving infrastructure around are bound to increase. Records of past three to four years do give clear indication of increasing number of deaths inspite of SASB/Government suggesting their having improved the infrastructural support. Therefore, keeping in view that the Yatra numbers are going to increase beyond 700,000, in addition to taking immediate measures for improving the track condition and infrastructure for stay/health care, at least the period of yatra should not be less than 100 to 60 days ( Provision can be there for issuing advisories when the weather is not permitting. In case it is done nobody would venture under bad weather). Therefore, to increase the capacity of tracks as well as ensure minimum safe travel conditions to the yatries, widening of tracks, consolidation with shingle and sand and at places to make good pony tracks with prefabricated tiles etc on the pattern of Vaishno Devi tracks is the minimum and urgent need.

04. Management of tracks at two axis :

4.1 There is a duality of administrative control. Pahalgam to holy Amarnatth Jee Cave Shrine, track is managed by the Pahalgam Development Authority under the supervision of DDC Anantnag. Whereas Baltal to holy cave track is under the control of SASB. Although the state government and its different wings support the SASB but there is dichotomy of authority and control.

4.2 On several occasions in the past it has been seen that the Baltal route is cleared first and the Pahalgam route clearance is delayed by atleast one month.

4.3 Once the SASB was created by the J&K government, the Pahalgam axis should also have been automatically brought under the administrative control of SASB. Clearance of both tracks should have been handed over to Border Roads Organization (it should be done now) who possesses sufficient expertise, men and machinery to clear snow/maintain roads. It is BRO that opens and maintains Zozilla pass for connectivity with Ladakh every May. Zozilla pass and Amarnath cave are located at almost same altitude. For BRO, that already has its presence at Sonmarg & Anantnag, it is not difficult to open and maintain these tracks.

05. Death Traps en route : On both the routes the condition of track is so bad that sometimes there is not enough space for horse/pony to keep its foot on ground firmly. Present Tracks don't have even needed earthwork done properly, have no shingle top consolidated smooth surface for the convenience of horses, laborers and foot yatris. Width of the tracks at some places is so less that hardly two rows one for coming and other one for going can just squeeze on these tracks. But for the last four or five years with the increase in number of Yatris more than four to five columns of Yatris walk on these tracks pushing each other and many persons and horses in the last row tread along the mountain slopes with the risk of any time falling in deep gorges. There are certain spots along the track which could be simply called "death traps" for the Yatris and Ponywallas.

5.1.1 Along the Pahalgam route First Death trap is from Chandanwari to Pisso Top. Track passes through the highly degraded and bouldery hilly slope with steep climb. No adequate efforts / plans have been made so far to develop this track properly with atleast 10 feet width. In this stretch separate tracks need to be made for Ponnywallas and Yatris on the pattern of Vaishno Devi Track. Possible repairs of the track should be taken up immediately after the Yatra is over so that less time in needed for repair before next year Yatra. Weather permitting good number of working days would be available from first week August to October for repairs and improvements.

5.1.2. Second Death Trap on this route is Sheshnag to Mahagunus (14500 feet) to Posh Pathri. Since on this stretch snow remains for long time till middle of June most of the Ponywallas and Yatris travel on slippery snow. This track can be better cleared from snow with the help of mobile snow cutters. If these machines are used in good number the track can be cleared in ten days but if laborers are engaged they will take atleast one to two months. Most of causalities/injuries have been reported in this stretch due to slippery snow.

5.1.3 Third death Trap along this route is the track form Panjtarni to Holy cave just above Sangam. This portion of track even normally gets cleared from snow right in the month of May or early June due to hotter and sunny aspect. But in spite of all this the condition of this portion is so bad that at places it becomes difficult for two Horses to cross each other. If one column of yatris or ponywalls pushes the other, some persons and horses from the other column are under an immediate risk of falling in the Sangam nallha. This portion requires widening upto fifteen to twenty feet so that three to four columns can move safely/easily. Simultaneously, if possible, sufficient space (upto 25 to forty feet) need be provided for resting of Ponywallas and Palkis atleast after every one kilometer. Creating such spaces would not need extraordinarily large excavations/earthwork disturbing the ecology/mountains that could over ride must requirements emerging out an issue of Hindu Aastha.

5.2.0 Along the Baltal Holy Cave track there are two death traps for Yatri's and Ponywallas. One is from Letri to Brari Marg (three to four kms ) and other is just above Sangam and through the Kali Mata track.

5.2.1 At Letri there is a big landslide from mountain top to the River below. At times large boulders roll down at high speed and strike the Yatris and Ponywallas. During rain these boulders and landslide sometimes start moving down at high speed bringing huge debris putting life of yatris to great danger and block the track also. In this portion of three to four kms there is a need to erect protection shelters on the pattern of Vaishno Devi track at ChanjiChat so that small boulders do not hit the travelers. Near Sangam, slope of track is so steep that most of the Yatris and ponywallas suffer the risk of falling into Nallah. This portion of track needs to be taken along the contour in two to three curves. Baltal Track requires widening at many places particularly from Letri to Brari Marg.

5.2.2 Kali Mata track of about two kms passes through the rocky portion with steep fall of upto 100 feet into nalla. The track was initially made by the laborers for their use with hardly a width of about one to two feet by putting loose stones together and few wooden sticks and bushes for support. Slowly Yatris also started using this track which is highly risky and dangerous. This portion needs to be developed in proper track atleast upto three feet width by half tunneling at some places. The track should be developed along the contour, slowly descending down touching the main track of shrine cave and avoiding any unnecessary curves along the hilly slope. Track should be exclusively for foot and Palki (Palanquins) Yatris and not for Ponies. If this track is developed it will reduce the distance by another four Kms to the cave and also reduce rush to the Sangam and also then at top where columns both from Baltal/Sangam and Panjtarni join and a big crowd is created pushing each other. At occasions the moving columns of Yatries are halted here for even two to three hours.

6.1.0 The Yatra management should now think of erecting temporary prefabricated steel shelter sheds with a capacity of about 5000 yatris at Baltal, Nunwan and Panjtarni. Tents are not fit for use in the cold and inclement weather, often tents get soaked in water and yatris have to sleep on mud (sometimes water flows under their beds). Prefabricated Shelter sheds can accommodate facility for healthcare and rescue centers.

6.1.1 At Panjtarni sufficient space is available for erecting two to three such types of temporary shelter sheds which can also serve as Rescue centres at the time of natural calamity.

6.1.2 There are other places also where smaller shelter sheds of 500 to 1000 Yatris can be erected along the Phalgam axis (1) at Pisso Top (2) in-between Pissotop and Shesh Nag (3) at Shesh Nag, Mahagunus and (4) Poshpathri.

6.2.0 Along the Baltal axis smaller shelter sheds should be erected at Brarimarg and Sangam.

To be continued... at Infrastructural needs and Environmental Impact - II : Shri Amarnath Yatra
Author is an environmentalist and field biologist and had headed the J&K State Pollution Control Board. Can be accessed at [email protected]