Swayamsewaks arrested in Kerala for taking out Republic Day Procession 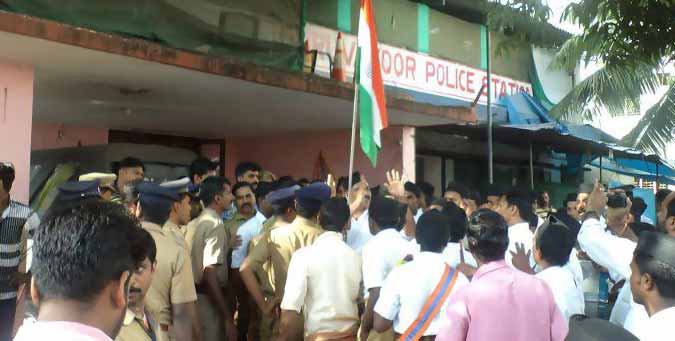 In a shameful incident, RSS swayamsewaks were arrested by police in Guruvayur, Kerala on January 26th 2013 while they were doing a path sanchalan (parade) to celebrate 50 years of the historic moment when RSS was invited by then Primeminister Pt Jawaharlal Nehru to take part in the Republic parade. Police even seized the Tiranga that swayasewaks were taking in the procession.

RSS earned recognition based on its volunteer work during the Sino-Indian War in 1962. Hence, it was invited by then Prime Minister Nehru to take part in the Republic Day parade of 1963. It along with several other civilian organizations took part in the parade. When many organisations objected on inviting RSS, Nehru said, "I have invited all patriots to take part in the parade." Later in 1965 and 1971 Indo-Pak wars too, the RSS volunteers offered their services to maintain law and order of the country and were apparently the first to donate blood.

RSS leaders have sought the permission but it was denied by police, Police did not give any explanation why they denied it. There should be no permission required for taking out a procession to celebrate the Republic day. The police insulted the National Flag. Many leading Malayalam news papers reported this news.