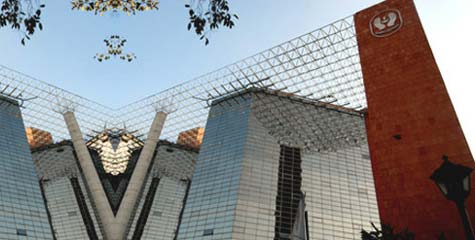 Standard and Poor’s has changed its outlook on India’s sovereign rating from positive to negative—from BBB+ to BBB-. It has said that the BBB rating will be withdrawn, maybe within two years, if the government does not take steps to put its act together—specially getting the increasing fiscal deficit under control. One reason for the Government’s inability to control the fiscal deficit is its failure on the disinvestment of Public Sector Undertakings. There is a need to revisit the issue.

Fundamental problem of the PSUs is control by the Government which necessarily entails political interference. Buying of ONGC shares by LIC does not solve this problem. Control of the PSU remains in hands of the government—only the control will now be exercised through LIC instead of directly.
For example, oil companies are buying crude at high price but selling it cheap in accordance with directives of the Government. Such would never be done by private players. Nevertheless the basic principle of Government control appears to be valid because PSUs are provided with various special benefits by the same Government. The LIC, for example, had monopoly on personal insurance business for long years. LIC has made profits for many decades and invested the same in real estate and shares. LIC is obtaining huge incomes from this investment today. The costs incurred by the PSUs due to Government interference have to be setoff against the benefits obtained by them due to such largesse. Even otherwise the very logic of setting up a PSU with public money is to attain a social objective. Therefore, political interference cannot be decried.

PSUs are not bad or anti-people. Certainly private enterprises are equally, if not more, cruel towards the people. But there occurs a three-way friction between the consumer, Private Corporation and government regulator in the case of private sector. Say a Private Corporation is stripping a company of its assets. A private investor or a social activist can approach SEBI and seek action. There is a three way friction between the Private Corporation, social activist and the regulator. It would be difficult to get a similar action in case of PSU. A social activist will have to approach the Minister in charge—who is the beneficiary of the stripping of assets. One would have to complain to the Minister who is, possibly, beneficiary of the asset stripping. The Corporation and the regulator are merged into the same entity of the Minister. There takes place only two-way friction between the consumer and the PSU-Regulator bureaucracy. The consumer can appeal to the government regulators against malpractices by private sector and these are, generally speaking, looked into. Not with the public sector. The PSU executives pose as having authority of their parent Ministries and are less afraid of regulators because they are part of the same government machinery. This absence of regulation leads to misuse of authority by PSU executives and to losses.

This is not to decry the positive role of the PSUs in nation building. The foundations of our industrialization were laid by the steel plants at Durgapur and Bhilai. Tractor was made first by Hindustan Machine Tools. Turbines were made by BHEL. Private entrepreneurs lacked the ability to establish such facilities at that time. But times have changed. The role of PSUs must be redefined now.
Fundamental reform of the PSUs should be placed on the national agenda. Nehru had thought that the command of the national economy will be in hands of the PSUs and role of the Private sector will shrink with time. The global experience of last 60 years has disproved this approach. The collapse of Soviet Russia can be traced, in part, to the inefficiencies in the PSUs which were run by Moscow-based autocracies. Cost of production of Russian goods increased and they were priced out of the global market. China has attracted FDI in a big way only because its leaders recognized that PSUs cannot deliver.

Mokshagundam Visvesvaraya, the Dewan of Mysore, helps us formulate the problem. The role of the State, he said, was not to run industries. That was the private sector’s job. However, this did not mean leaving the task to them alone. The State had an active role in supporting the private sector. The starting of new industries called for entrepreneurship and adventure. The private sector suffered from the fear that capital that was invested might be lost. Therefore, says his biographer Narayana Rao, Visvesvaraya held that the government must itself start new industries on a pilot basis and hand them over to private hands when successful. Need of the hour, therefore, is not to change the mode of government control over PSUs but to dismantle government control altogether.

Three alternatives are before us in this regard. First alternative is to maintain absolute control of the Government over the PSUs and at the same time to indulge in accounting jugglery to raise funds. This is being done by asking LIC to buy shares of ONGC; or by asking PSUs to buy back shares held by the Government. This is the worst alternative in my reckoning because the absolute control of the Government remains intact and there is no additional check on corruption and inefficiency pervasive in the PSUs. Second alternative is to divest part of the share held by the Government to the public while retaining majority control with the Government. This was tried successfully in pervious IPOs like that of State Bank of India and unsuccessfully in the recent issue of ONGC. Positive aspect of this is that private investors work as a watchdog over workings of the PSU.

Independent Directors are appointed and disclosures have to be made as per regulations of the stock exchanges. This is a middle level alternative. It is good because there is some independent market oversight but not so good because control remains with the Government. Third alternative is to sell strategic shares to a private investor and hand over control of the PSU to him as was done in the case of BALCO, VSNL and Maruti earlier. This is the correct model that the Government must follow. Strategic disinvestment will bring in more money and help control the fiscal deficit and maintain India’s BBB rating.