Congress is responsible for rise in corruption in the country , Don't vote : Baba Ramdev 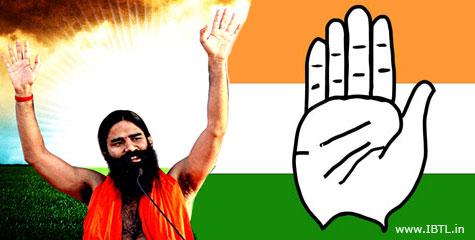 Blaming Congress for rise in corruption, Yog guru Baba Ramdev today urged public not to vote for the party in state and general elections.

"Congress is responsible for rise in corruption in the country. You (public) all should ensure that its candidates do not win in Vidhan Sabha and Lok Sabha polls," Ramdev told reporters here. He said faulty economic policies of the UPA government have resulted in rise of poverty.

Addressing a gathering here, Baba Ramdev said Jan Lokpal Bill will help in reduce corruption among those sitting at top government posts to some extent. "There are more than ten crore government officials in the country of we combine all those working at the Centre and in various State Governments. How will one Lokpal have control over all of them? So, Lokpal is a step in the whole process of getting rid of corruption. We can control corruption to some extent at the higher level through Lokpal," said Yog guru.

Ramdev further said the Parliament will have to play a prominent role in this whole process of getting rid of corruption and bringing back all the illegal wealth stashed in safe havens abroad.

"The day we recognise the power of the country and the power beneath us, that day India will be all ready to lead the whole world," he added.