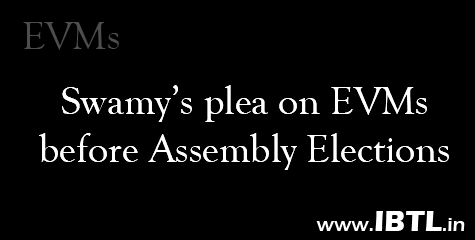 Delhi High Court has set January 10th as the date to decide on the issue of EVM’s use in comping Assembly elections. Dr. Subramanian Swamy had filed this plea citing the lack of transparency in EVMs. Dr. Swamy has insisted that either paper printouts should be incorporated in the EVMs or the Election Commission should return to the ballot paper system to avoid tampering at the time of polls.

This holds vital importance after the expose of EVMs being tempered to benefit Congress [link to Congress’ EVM temper article]. Prior to this, several Opposition parties including the BJP have also demanded that polls be conducted through ballot papers alleging mass tempering of EVMs in 2009.

Dr. Swamy argued before a division bench of acting Chief Justice AK Sikri and Justice Rajiv Sahai Endlaw, that ‘transparency’ had to be given priority over ‘efficiency’ in the poll process. He explained that EVMs’ electronic database in chip controlled and that’s not temper proof. He also cited examples of technologically advanced European nations which don’t use EVMs for the same reason.

However, the Election Commission has said in court that the use of ballot papers was not feasible as not only it would require immense expenditure but also result in cutting down forests as there are 73 crore voters in India. EC counsel said, “ We are still exploring the possible modifications in the EVMs. The EVMs have a benefit that electronic database in them can be reconstructed anytime”.

EC had referred the issue to a 3 member expert committee headed by Prof PV Indiresan, former Director of IIT Madras after a demand raised in an all-party meeting. The committee is considering introduction of “paper trail” so that voters can get a printout that will show symbol on which the vote was cast. It also held discussion with officials of the Bharat Electronic Limited and Electronic Corporation on the issue but is is yet to take a final call on the matter.