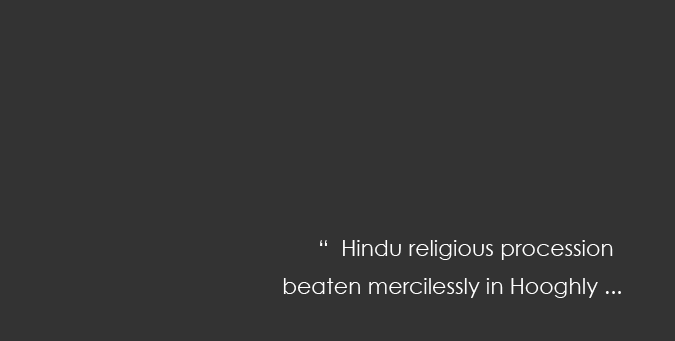 The 34-year long rule of the Left Front in Bengal, according to some quarters, was not spontaneous, but the effect of a few secret measures adopted by Left bigwigs to retain their hegemony for eternity. These include implementation of land reforms, reorganization of Panchayats, expansion of small agriculture, provision to render foods in exchange of works in villages and rural economic development.But still there was a setback in the election of 1982, and though the Left Front managed to retain dominance, deep uncertainty started to gnaw its premier leaders.

There was a need for a stable alternative that could provide the Left certainty of electoral triumph, and there was none better than giving a fillip to illegal immigration of Islamists from Bangladesh to India; this would ensure their sway completely. So a vicious plan was undertaken, subverting national sovereignty and democracy. Illegal immigration became the order of the day, as evidenced by an assortment of reports of that period. The bordering districts of India-Bangladesh border have virtually turned into Islamist strongholds where each Hindu man lives in utter fear and the modesty of a Hindu woman is highly vulnerable.

Take the situation in 24 Parganas border district. According to Bimal Pramanik (Endangered Demography: Nature and Impact of Demographic Changes in West Bengal, 1951-2001), “The 1981-1991 decade witnessed a massive growth rate of Muslim population, viz. 41.47%. This obviously is due to Muslim infiltration from Bangladesh. Consequently, the share of Muslim population rose from 22.43% (1971) to 24.22% (2001) within three decades, in spite of a massive Hindu immigration from Bangladesh during the same period. It will be more revealing if we go through the Block-level demographic changes. It needs a special mention that a large number of Muslims who had migrated to East Pakistan after Partition came back to this district not only during 1951-1971 but also after 1971, and this remains a persistent trend till today. Another important feature that needs mention in this connection is the continuous in-flow of Urdu speaking Muslims from Bangladesh after 1971.”

Hindus have also been entering India from Bangladesh, but as persecuted people only, and this gets more evident from the fact that they continue to live in Bengal devoid of any ration card, not to speak of any proper identity. The Left Front was brilliant in denying their claims of being legitimate refugees while bestowing all sorts of legal facilities on Islamists without delay.
Article 1 of the 1951 UN Convention as amended by the 1967 Protocol states that, a Refugee is “A person who owing to a well-founded fear of being persecuted for reasons of race, religion, nationality, membership of a particular social group or political opinion, is outside the country of his nationality and is unable or, owing to such fear, is unwilling to avail himself of the protection of that country; or who, not having a nationality and being outside the country of his former habitual residence as a result of such events, is unable or, owing to such fear, is unwilling to return to it..” Hindus of Bangladesh are refugees and any attempt to deny this is untrue and baseless.

The Statesman in a report “3.8 million and counting”, reported that 3.8 million people in Bengal have been using bogus ration cards (provided only in Left regime only). Another 7.5 million cards are believed to be in circulation. Jyotipriya Mallik, Minister for Food and Supplies, said, “We started this drive from the very beginning of my tenure but for the past few months we were busy with procurement. We resumed the drive in April and in one month 1.8 million bogus ration cards were seized.” He has asked ration dealers and distributors to deposit fake ration cards within a specific period or be prepared for harsh measures.

* Hindu religious procession beaten mercilessly in Hooghly: How Islamists remain outfitted (round the clock) to harass and thrash Hindus was again exposed on May 15, 2012, at village Santoshpur, P.S. Jangipara, Hooghly. Hindus have been observing Raksha Kali Puja there for decades and as a part of the program, on the fateful day, Hindus, mostly women, were carrying Gangajal from Sheoraphuli Ganga ghat to Santoshpur along with the holy deity. Musical instruments were played in the procession and the environment was joyful. Almost 50 policemen were guarding the procession.

But at 6 pm, police stopped the procession at No. 31 route for 40 minutes, to allow namaz at the Santoshpur mosque to be undisturbed. Hindus reacted strongly; they blocked the road to give vent to their feelings, but police said this was as per order of SDO. The procession resumed at 6.40 pm and the moment it reached Santosphur crossing, it was stopped by a number of armed persons led by Sahabuddin Mallik, Samsuddin Mallik, Rezwan Ali, known strongmen of the neighborhood. The Hindu religious procession was attacked, Hindu women thrashed with bamboo sticks, some were even stoned and sustained grave injuries…

All this happened in the presence of the police and only when Hindus hit back did the police step in and disperse the gang. The Kali puja was completed under tight security.

* Madrasa, Urdu & Imams' Honorarium: Mamata Banerjee and fate of West Bengal: Mamata Banerjee has shamelessly surrendered to the Islamic fundamentalists. On 3 April, she convened a meeting of Imams at Netaji Indoor Stadium in Kolkata and proudly declared a monthly honorarium of Rs .2500 per head for 30,000 Imams of West Bengal. Does India’s secular constitution permit any government to organize a meeting of religious representatives of just one community?

Then she announced that mosque Muezzins would be provided with a monthly honorarium of Rs. 1000. How did Mamata's government conclude that the Imams are poverty-stricken? During last decade have the number of mosques gone up or come down? Has not the area, volume and floors of these mosques gone up exponentially, indicating a free flow of funds? Then why this magnanimity of Rs. 90 crore annually? This is taxpayer money; who has given government the right to embezzle this money?

CPI (M) had reserved 10% jobs for Muslims, which is totally against the constitution. It used legal loopholes, categorizing all Muslims, rich as well as poor, as ‘OBC’. Mamata added 33 more castes to take the number of Muslim OBC castes to 98. She said eight more castes will be included subsequently. She also formed a task force to explore innovative possibilities to hoodwink the constitution and open government coffers for unbridled unconstitutional benefits to Muslims.

Mamata has declared that the ten thousand Madrasas outside the ambit of State Madrasa Education Board would be recognized by the state government. The curriculum of these Madrasas, presentation as well as those conducting the courses will be completely beyond the purview of the Madrasa Board or the control of the government. They would be beyond governmental observation but would have government recognition.

Mamata’s decisions are highly detrimental to the national interest. She declared Urdu as the second official language in districts where the Urdu speaking population is just 10%, a suicidal and divisive policy. In fact, Urdu domination spurred the language movement in erstwhile East Pakistan, leading to the formation of Bangladesh on a linguistic basis.

* Jalaberia: Applied Secularism: In Jalaberia, Kultali P.S., South 24 Pargana district, two dacoits were killed by mob some days ago. Now, on June 5, police are raiding the area at the dead of night, 2 am., beating and torturing the people including women. Some have already been arrested. People are feeling scared and helpless.

Seven year old Tarani Haldar’s hand has been fractured by police torture; he was seriously injured and had to be hospitalized. Others injured include Smt. Anjali Naskar (22); Smt. Bhadduri Sikari (45); Smt. Mallika Haldar (35); Sri Bijay Bairagi (35). It is unclear whether the rural hospital gave them an injury report and whether police will allow them to lodge a complaint against the police.
Taranagar is just 7 km. from this place. There was massive torture and arson in that village, but no worthwhile police action. This is the applied secularism of West Bengal. Common Hindus are accustomed with it. The consequence is migration.

Who will resist? Men ask me, what should they do when their women are being beaten up by the police? What should be my answer? If I tell them to resist, we will be considered law breakers and extremists. Mamata will get a chance to crush us.

But the people resisted in huge numbers; the Police fired and arrested five persons. Police beat and tortured many women. Both CPM and SUCI party leaders pressurized police to do this. I cannot reach there because of distance and my schedule to go to Delhi to attend a court date. Thousands of Hindus have gheraoed Kultali P.S. demanding release of the arrested.

There is a total media blackout, which is the norm here. There is a huge build up of communal tensions in the region.