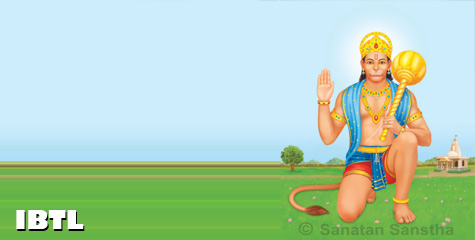 Hanuman Jayanti is celebrated on the pournima (full moon day) of the Hindu Lunar month of Chaitra. On this day, the Hanuman tattva (Hanuman principle) is more active than on any other day of the year.

Lord Hanuman's mother, Anjani had observed penance like the queens of king Dasharath (father of Lord Rama) and had received payas (rice boiled in milk with sugar, distributed as sacrament from sacrificial fires). It was through the blessing of this holy sacrament that the queens were conceived. Hence, Lord Hanuman is also considered as a brother of Lord Rama.

a) Omnipotence: Lord Hanuman is the only deity who cannot be troubled by negative energies. He was born of absolute air element (vayutattva). We human beings are born of five cosmic elements namely; pruthvi (earth), aap (water), tej (fire), vayu (air) and aakash (ether).

b) Supreme devotion (bhakti): Hanuman's devotion and service unto Lord Rama is the best example of devotion of a servitor (dasyabhakti) unto The Lord. He was ever ready to sacrifice even His life for the sake of His Lord.   Service of His Lord was more important than attainment of Liberation (Moksha). Hanuman is an ideal combination of a servitor and a warrior!

a. The one having immense bhav (spiritual emotion) towards Lord Shri Rama: Lord Hanuman is always present in the subtle form wherever Shri Rama’s bhajans and kirtans are sung. By listening to the praises of Shri Rama, Lord Hanuman goes in the state of bhav (spiritual emotion). Seeing His intense bhav, Shri Rama is also present there in the subtle form. Their subtle presence leads to the activation of the devotee’s sattva component.

b. The one who has the right balance of immense surrender bhav and intense yearning (talmal): To progress in spirituality one needs to have constant surrender attitude and also have intense yearning. By having the right balance between the two qualities, a seeker will always have Guru’s Grace on him. This helps in constant increase in bhav and reduction of ego.  Lord Hanuman always had surrender attitude.  He had the constant thought that ‘Whatever is happening is due to Shri Rama Grace’ and surrendered every action unto Him. Lord Hanuman had an intense yearning to merge with Shri Rama’s Feet (become one with Shrirama’s form).  This quality was not only at the psychological level but also seen in all His actions. Whenever He was doing seva (service unto the truth) of Shri Rama’s gross as well as subtle form, He would forget Himself, hence all His actions (seva) were 100% effective and paripoorna (perfect). Lord Hanuman was always successful as He always had Shri Rama’s constant grace upon Him.

c. Always loyal to the principle:  Lord Hanuman did not get caught in Shri Rama’s gross form (sagun) but merged with His Principle. Due to this quality he was able to guide Lav and Kush (Lord Rama’s children) to rule their kingdom after Lord Rama renounced His body.

d. The best disciple without ego:  Unless the ego of a disciple dissolves totally, he cannot merge with His Guru. Lord Hanuman’s ego was totally dissolved hence He could merge with Shri Rama’s form. He had put Himself in Shri Rama’s care. He always had the thought that Shri Rama is getting everything done.

The qualities of servitor Lord Hanuman:

a. Sacrifice of everything: To serve Shri Rama in paripoorna way Lord Hanuman would always surrender His body, mind, intellect and ego at Shri Rama’s Feet. He was always ready to die for Shri Rama.

b. Always full of faith: To reach a higher spiritual level a devotee should have 100% faith in God. Lord Hanuman had 100% faith in Shri Rama and due to this quality He was always in the steady (no doubt) state.

c. State of complete gratitude with spiritual emotion: Lord Hanuman would give all credit to Shri Rama for all His actions. He was always in gratitude to Shri Rama. He would have tears in His eyes when showing gratitude unto Him.

The qualities of courageous Lord Hanuman:

a. Fearless: Due to Lord Hanuman’s unwavering faith and zero ego state, He was always one (merged) with Shri Rama in subtle. He always experienced the videhi (nil body awareness) state. So He had no fear of life and would always fight with 100% fearlessness.

b. Righteousness: Due to His devotion towards Shri Rama, righteousness was in His blood. He had intense anger towards the distressing energies and the evil doers. He would fight with them with full force.

Worship of Lord Hanuman: As Lord Hanuman’s manifest energy is more, he is worshipped in the context of energy in two ways

2. To control pleasant energy: To overcome any obstacle in the pathway of the activated spiritual energy system (kundalini) and to channelize it appropriately, so that the seeker can continue his spiritual practice smoothly.

Why should not an idol of Lord Hanuman in seated posture be installed in a temple altar?

The word 'Hanuman' means - "One whose 'roar' cannot be fathomed even by Deities." When deities perform a destructive activity, they use the 'Hanuman' element (which moves at the speed of wind) as a medium to appear in the Universe. Hence He is referred to as Maruti. The roar of Lord Hanuman is capable of activating the element of any higher deity in the Universe engrossed in deep meditation. Similarly, it also possesses the power to shake all the fourteen planes (saptalok and saptapatal). Hanuman in seated posture depicts the unmanifest form of power and in a warrior posture depicts the manifest form of power. To obtain benefit of the gross, manifest and destroyer element we should avoid installing a seated idol of Hanuman in a temple.

Ritualistic worship of Lord Hanuman: In Maharashtra, Saturday is considered as an auspicious day for Lord Hanuman's worship. In the rest of India, both Saturday and Tuesday are considered as auspicious days for His worship. On these days, vermilion and oil are offered unto Him. Vermilion and oil have the ability to attract the subtle pure particles (pavitrakas) of Lord Hanuman. Choosing the substances offered in the worship according to the Science of Spirituality helps to charge the image and idol with subtle particles (pavitrakas) of that deity. Worshipping a spiritually charged image of a deity is obviously more beneficial in activating faith and spiritual emotion in the devotee.

In some places coconuts are broken in front of Lord Hanuman’s image, as offering. Breaking of a coconut signifies the ’shattering’ of one’s (’hard’ to overcome) ego and intellect at The Lord’s Feet. Lord Hanuman’s worship yields protection from negative energies. Therefore on the days of His worship, people affected by negative energy, worship Him by offering oil and vermilion, to expel some negative energy that may be within one.

Celebration of Hanuman Jayanti: On this day, spiritual discourses are started before dawn and ended at sunrise along with distribution of Holy sacrament (Prasad) in all Lord Hanuman temples. (Lord Hanuman was born at Sunrise). On the day of Hanuman Jayanti it is recommended to chant “Om Ham Hanumate Namaha”, during the birth time of Sree Hanuman, that is, from 6 AM – 7 AM (IST), and during the rest of the day as well. To get maximum benefit of the Hanuman principle let us all chant His Name on this day.

Let us pray to Lord Hanuman to bless us to develop His qualitiy of intense devotion and removal of our negative attitudes so that we progess spiritually.

We wish you all a blissful Hanuman Jayanti and spiritual nourishment always.