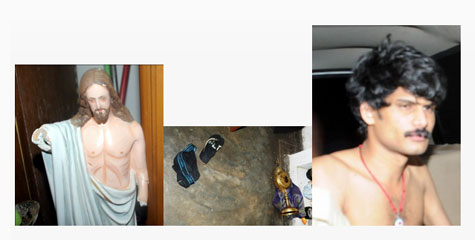 Here is a shocking twist to the alleged church attack in Mangalore: the act of vandalism was the violent repercussion of repressed lust and libido. The attacker, Shibu, a locallite and converted Christian from Kerala, a bus conductor by profession, shared an amorous and sexual relationship with a nun. With their illicit activities being exposed and spreading like wild fire amongst inmates, stiff opposition followed. This infuriated Shibu. What followed was the destruction of the statues of Mother Mary and Jesus Christ.

The clandestine relationship between Shibu and the nun was no secret, with the nun making frequent journeys in the bus, in which Shibu worked as a conductor. Their relationship scaled new heights, with Shibu not sparing any occasion to visit the seminary when the high priest was not in station. The two indulged in passionate sex quite often. Branded male inner-wears discovered from the spot speak volumes about the nature of acts performed at the spot.

For mainstream media who was quick to pin Hindu Organizations behind the attack, cover up reality and pronounce verdicts, here are a few posers:

The episode took place at 8.30pm, but according to police sources, they received information an hour later, at 9.30pm. The delay in passing information to the police was evidently intentional, considering the fact that there was a police station in obvious proximity to the church.

Why has the investigation report not been declared by the district administrations and city police even after a span of 12 days? What shattering reason could lurk behind the pregnant silence?

The act of vandalism occurred in the senior priest’s room. If the Father was not in station, how did Shibu get access to the keys of the room?

If Shibu, was a representative of a ‘Hindu Organisation’, how was he caught so easily? For an act of vandalism, why would a person want to make a solo appearance?
Why were Shibu’s clothes, an underwear of brand ‘Jockey’, in particular, found inside the room?

On November 7, why did a group of people from the church invite Shibu’s father to a secret destination for holding compromising discussions?

There is a lot of uncertainty, a whole lot of mystery shrouding the entire episode. Sangh Parivar has clarified through Viswa Samvada Kendra that Shibu is, in no way, connected to Sangh.  Shibu is an ordinary man- a man with emotions, a man frustrated by repealed love. “It is unfortunate to blame Sangh Parivar for anything and everything, though we have good ties with many Christian leaders,” said a top RSS functionary from Mangalore. “We condemn any attack on any religious sentiments,” he said.

People of Mangalore are now eagerly waiting for the final report, to be furnished after the police inquiry.